It’s no surprise that younger people in the U.S. are less religious than their parents’ generation. But a new study released today by the Pew Research Center shows precisely how influential parents are when it comes to their kids’ religious views.

Here’s the bottom line: Kids share their parents’ views on religion. That’s especially true of evangelicals and non-religious parents, less so for Mainline Protestants and Catholics. But when there’s any kind of break, those kids run the hell away from organized religion. 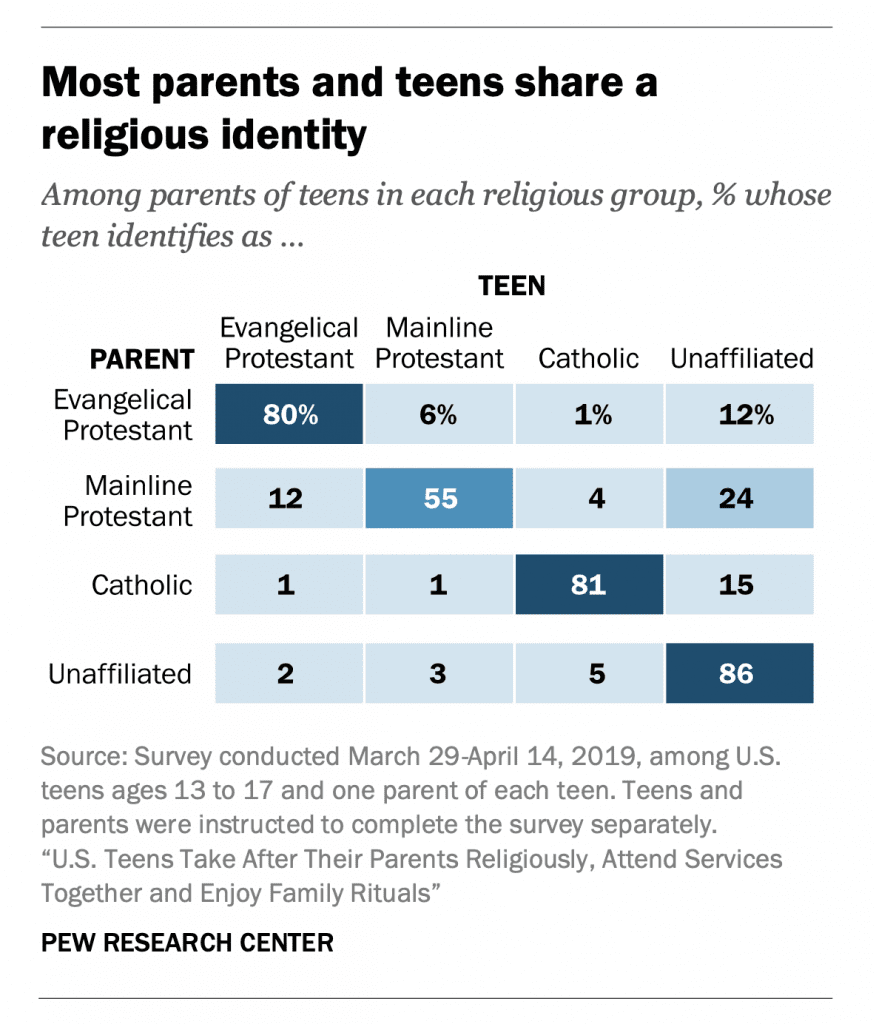 Look at that line for Catholics! When kids leave Catholicism, they don’t just become some other kind of Christian. They leave religion for good. Among Mainline Protestants in general, some kids who leave their parents’ church become evangelicals, but many more leave Christianity altogether.

Keep in mind the teens in this study are 13-17. This is what they’re saying when they’re still living with their parents. The move away from organized religion will only get faster as they gain more independence.

Here’s another interesting result: Among kids whose religious beliefs are different from their parents, a third of them said their parents have no idea. 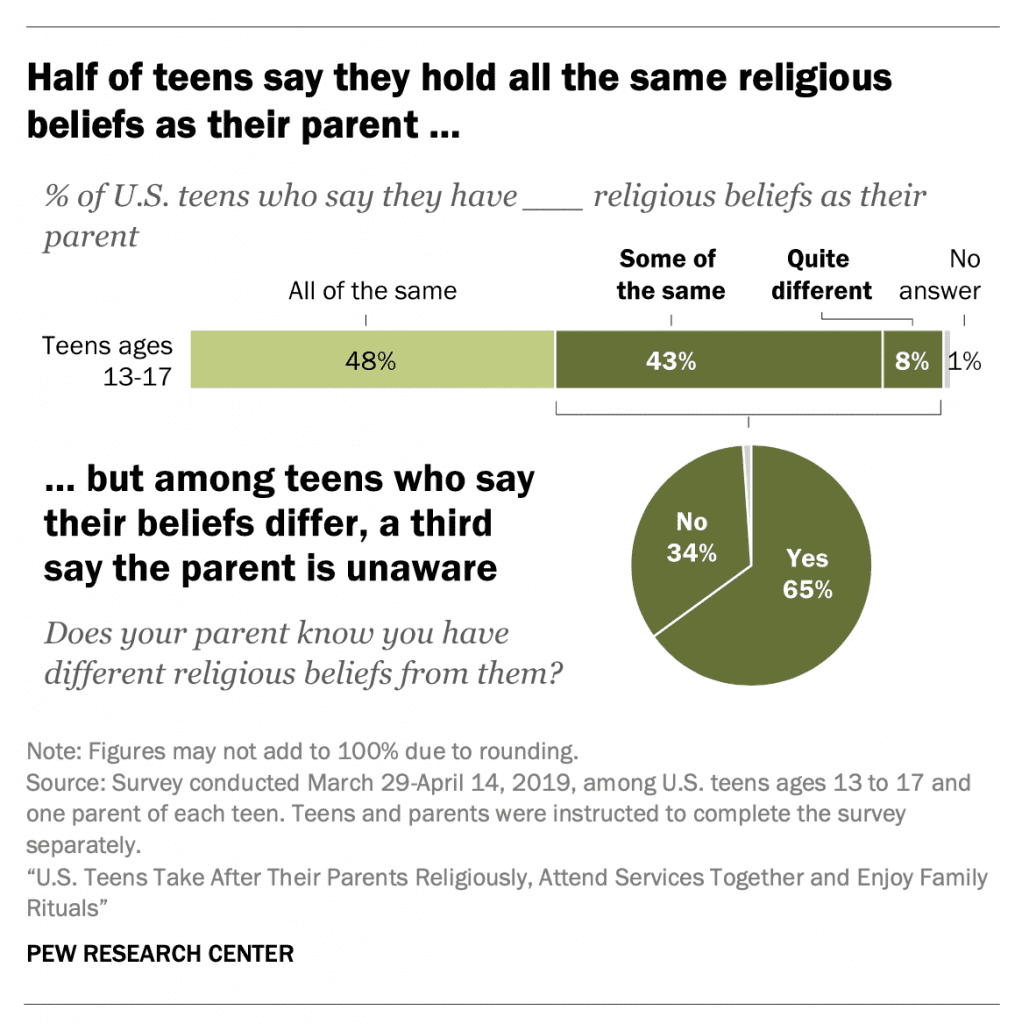 … of approximately 1,800 teenagers who were surveyed alongside one of their parents, about half the teens (48%) say they have “all the same” religious beliefs as their parent. But among the other half of all teens — those who say they share “some of the same” beliefs or hold “quite different” beliefs from their parent — about one-third (34%) say their parent doesn’t know that they differ religiously. And one-in-six (17%) say this difference causes at least some conflict in their household.

Ultimately, while this survey doesn’t say anything about how religious or non-religious a younger generation will be, it shows that many kids go along with religion to appease their parents.

… many teens say their participation in religious activities occurs mainly because of their parents’ desires, not their own. And even though teens may attend religious worship services as often as their parents, they are less likely to say religion is very important in their lives. Moreover, consistent with previous research, the survey shows that religious attendance declines in the final two years of high school…

By the way, in case you’re wondering how many of those teens are openly non-religious, it’s about a third of them: 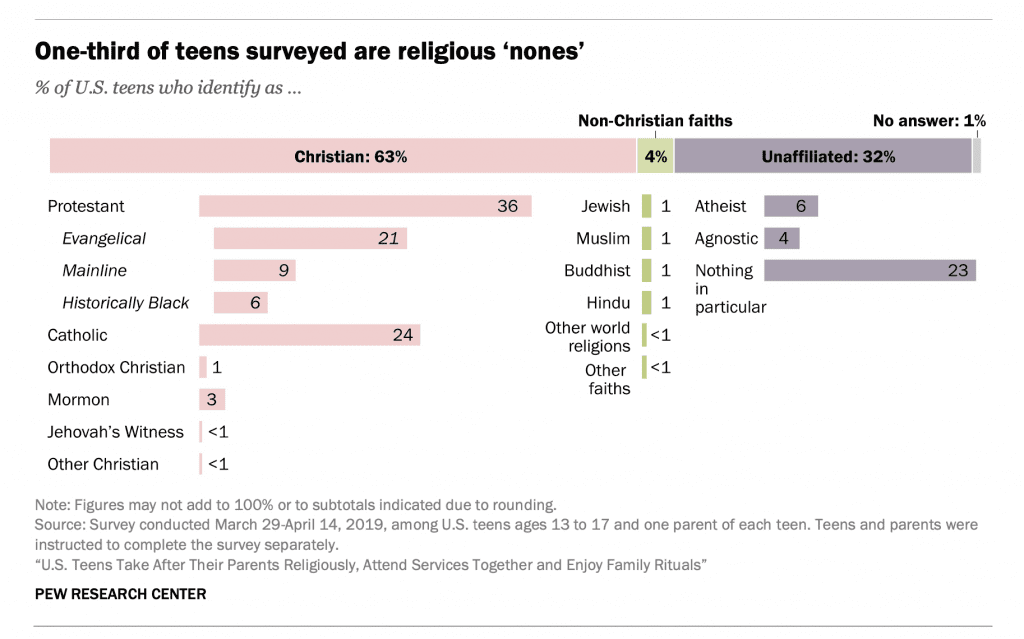 Again, that’s only a third. Many, many more will shift to non-religious as they head to college and don’t have pressure from their parents hanging over them. 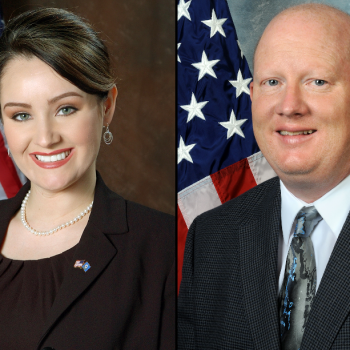 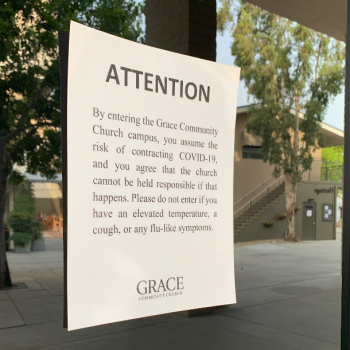 September 10, 2020 L. A. County Issues $1,000 Fine to COVID-Denying Church Over Sign Violations
Browse Our Archives
What Are Your Thoughts?leave a comment