The community has tried to find creative ways to drown out the hate, but calls for official police protection — heck, even requests to enforce noise bylaws! — have gone ignored. The issue gained prominence when anti-LGBTQ preacher Dorre Love attacked a local resident who asked him to turn down the volume on his litany of hate. 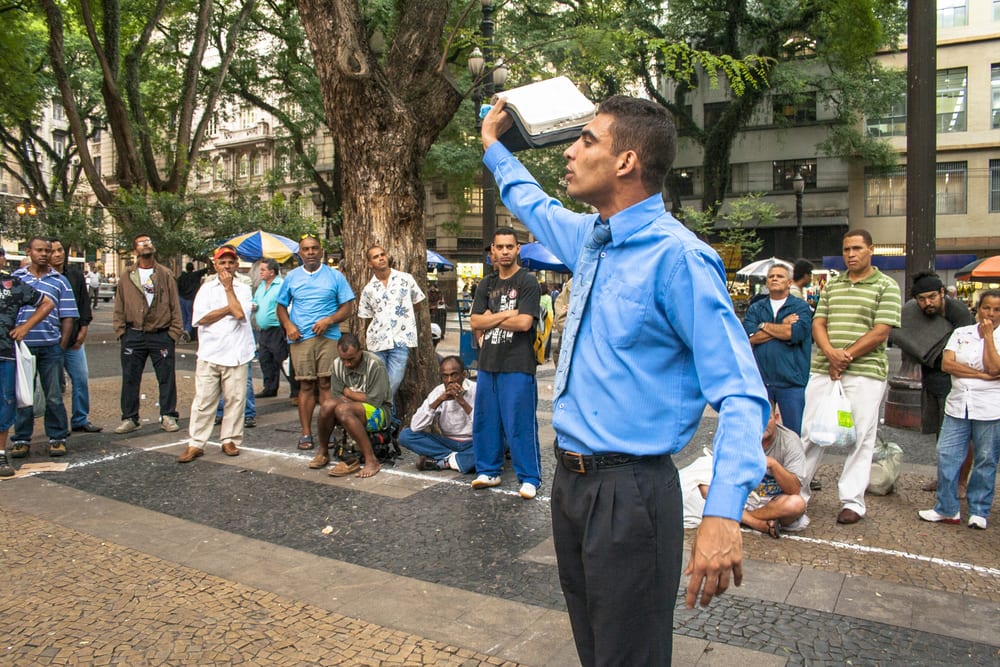 Vancouver mayor Kennedy Stewart says the LGBTQ community has every right to be “outraged” by the plague of hate preachers that has descended on the West End. While the enforcement of noise bylaws has a place, he says that alone isn’t enough to scare off the Bible-bashers:

There’s been a number of ideas floating in the community; one’s enforcing, say, a noise bylaw. But that’s really just the ticket. You can pay your ticket and come back and do it over and over and over again, so that’s not something that’s going to stop targeted repeat behavior.

Given that Love and his onetime compatriot David Lynn have both used powerful amplifiers to make their message inescapable, targeting multiple LGBTQ enclaves across Canada, it seems safe to characterize this as “targeted repeat behavior.”

But Stewart thinks he may have found the solution. He calls it a “bubble zone” — a buffer to protect vulnerable communities from the preachers who want to verbally attack them:

One option I’m looking at is the possibility of creating a bubble zone around the Davie Village. And it would be something like what occurs at abortion clinics, where we have the same kind of behaviour — this kind of very threatening speech [that] doesn’t quite cross the line of breaking the law. And so a bubble zone basically creates a physical distance by which you can conduct those activities.

Why not just prohibit this kind of threatening speech as a whole? Well, part of the problem is that this exact type of hate speech, however harmful to the group being targeted, is a protected form of expression in Canada.

Let’s take a look at the relevant section of the Criminal Code, which outlines the circumstances under which hate speech is a crime:

Every one who, by communicating statements in any public place, incites hatred against any idenfitiable group where such uincitement is likely to lead to a breach of the peace is guilty of an indictable offence and is liable to imprisonment for a term not exceeding two years; or an offence punishable on summary conviction.

Every one who, by communicating statements, other than in private conversation, wilfully promotes hatred against any identifiable group is guilty of an indictable offence and is liable to imprisonment for a term not exceeding two years; or an offence punishable on summary conviction.

Seems straightforward, right? But the Code goes on to list a few very broad defenses against the charge of inciting hatred. It turns out it’s not harmful hate speech “if, in good faith, [the accused] expressed or attempted to establish by argument an opinion on a religious subject.”

On top of that, Constable Anthony Statham of the RCMP’s hate crime unit in British Columbia says that in practice, such charges come into play when a person has used hate propaganda to incite violence against a vulnerable group.

In other words, as long as preachers like David Lynn and Dorre Love steer clear of directly calling for violence, they can make whatever hateful statements they like about LGBTQ people without falling afoul of the law. And even if they do cross a legal line, the religious exemption gives any hate preacher with a halfway-decent lawyer a reasonable chance of evading consequences.

Despite these shortcomings of the law, Stewart says he has considered using hate crime legislation as part of a multi-pronged strategy against the hate-preachers, and has consulted with BC’s Attorney General David Eby about policy options to confront the increase in hate preaching across the city:

It’s come to my attention that these preachers now are not just in the West End and on beaches, they’re also at Joyce SkyTrain station, at Commercial Drive. So I’m widening my look at how perhaps we can protect the entire city against this type of hatred.

Meanwhile the LGTBQ community is feeling targeted for harassment and abandoned by police. Police department spokesperson Aaron Roed says the preachers’ anti-LGBTQ diatribes are “disgusting and intolerable,” but the police continue to tolerate it in the name of “freedom of speech” and “allow[ing] people to have their voices heard.”

As several neighborhood members have pointed out, that usually means the preachers get to make their voices heard ad infinitum, forcing others to listen through sheer loudness, while community members struggle to speak up safely.

A buffer zone to protect the community from unwanted religious speech is a good short-term solution, but free speech laws also require a larger reckoning. The right to speak freely is not the same as the right to a captive audience. And it’s downright morally wrong to expect the LGBTQ community to host their detractors indefinitely at the expense of their own dignity.