In a video that’s gone viral among conservatives, Rev. James Altman, who runs a church in Wisconsin, says that you “cannot be Catholic and be a Democrat. Period.”

The main thrust of that video is that abortion is evil. Joe Biden, of course, is a devout Catholic who mostly supports pro-choice policies (even if it takes some work).

But the rebuttal to that argument is obvious: Donald Trump is a moral monster whose entire life has gone against the teachings of Jesus. Yes, he’s appointed anti-abortion judges, but beyond that, there’s nothing connecting his policies with the better aspects of the Church. He’s beyond cruel, he lies constantly, he’s greedy, he uses charity as a way to make money for himself instead of helping the less fortunate. This list could go on for a while.

And yet it’s not just one priest who’s promoting this religious hypocrisy, as noted by Religion News Service:

The video, which was produced by Alpha News MN, a website that has ties to the prominent Republican donor Robert Cummins, according to Minnesota Public Radio, has been viewed close to 300,000 times, claiming that the church has to condemn immoral politics.

“And so we can see in the many godless politicians, in the godless educational system, in the godlessness of so many ‘sheeples,’ they are most definitely not serving him, they are not fulfilling their purpose in life,” Altman says in the video.

To people this ignorant, everyone who’s not a conservative believer is inherently atheistic. There’s no such thing as a progressive Christian in their minds.

That video also includes a part where Altman claims climate change is a “hoax,” which directly contradicts what [checks notes] Pope Francis has said. (I guess the pope isn’t really Catholic, either?)

By the way, just yesterday, pool reporters noted that Biden spent his morning in a church while Trump was out golfing. But guess which guy the priest thinks is more properly devout?

Anyone who can’t tell the difference between the moral sincerity of these two candidates has no business telling other people how to think. It’s bad enough that an institution mired in child sexual abuse continues to pretend it has moral authority, but when its mouthpieces are going around claiming a vote for Democrats would somehow be un-Catholic — even though nearly half of U.S. Catholic voters supported the Democrat in 2016 — we should all remember that the Catholic Church has no legs to stand on, especially when it comes to telling people what’s righteous and good in this world. 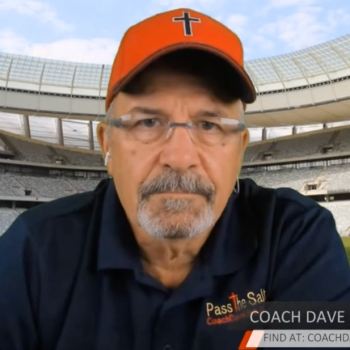 September 7, 2020 Dave Daubenmire: Refusing to Serve Me Because I Won't Wear a Mask is Like Racism
Browse Our Archives
What Are Your Thoughts?leave a comment