Dave Daubenmire: Refusing to Serve Me Because I Won’t Wear a Mask is Like Racism September 7, 2020 Beth Stoneburner

Dave Daubenmire: Refusing to Serve Me Because I Won’t Wear a Mask is Like Racism

What is it with right-wing Christians frothing at the mouth over having to wear a mask in public places? A month ago, Pastor Greg Locke unleashed a tirade against Dunkin’.

Now Dave Daubenmire can’t believe a manager at a T-Mobile store asked him to wear a mask. Never missing a chance to stretch the truth, Daubenmire compared the experience to racism:

“I ain’t wearing no mask,” Daubenmire declared. “I know the mask doesn’t work, and I’m not going to wear my mask to make the worker at T-Mobile feel better. I’m not gonna do that. That’s bearing false witness.”

The CDC, people with actual medical degrees, and everyone who lives in countries where the virus has been all-but-defeated as a result of mask use beg to differ.

“I think the forced wearing of masks is exceedingly dangerous to our American society,” he continued. “I will have no part of it. The T-Mobile guy said, ‘Well, we’ll have to do the work outside.’ They wouldn’t let me in, and the boss got involved, the manager got involved with it. I said, ‘Ma’am, I have a heart condition. I don’t even have to tell you that, but I have reasons that I’m not gonna wear a mask. It’s medical. Are you refusing to give me service because of a medical condition that I have?’”

It’s not clear if Daubenmire has this condition. But it’s very clear that Daubenmire believes his supposed medical condition should be taken into consideration by everyone else while spreading the virus, which is the concern when you’re not wearing a mask, is something he freely ignores.

And then he went for it:

“And then I really pulled the trump card,” Daubenmire recounted. “I said, ‘I think I was born with this medical condition. I’m not sure. I think I was. And I want to ask you something ma’am: Would you refuse to serve somebody because they’re Black?’”

“I was born with this condition, ma’am, and you would not ask a Black man to step outside of the the building and you’re not going to ask me to do it,” he concluded. “She stormed away, as you can probably imagine. Ruined my whole day.”

Being Black is not something you choose. Being ignorant and dangerous is. If Daubenmire refuses to wear a mask, then he’s putting everyone else in danger — and harassing store employees who are simply doing their jobs. He can order groceries online. He can buy a phone online. He can have other people run errands for him if he’s unable to go out. There are ways to get around the mask requirement if his medical condition requires it.

But he doesn’t care. His goal in life is to inconvenience other people.

If women in labor can wear masks, he can do it too, certainly for a few minutes inside a T-Mobile store. 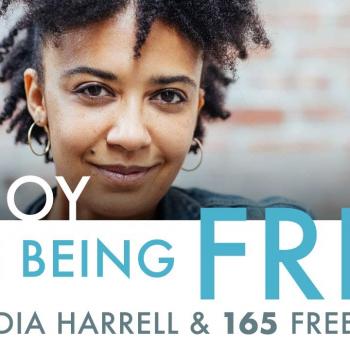 September 7, 2020 "Our Joy Is Being Free": This Video Features 166 Former Jehovah's Witnesses
Browse Our Archives
What Are Your Thoughts?leave a comment