While some students in the Williamsport Area School District in Pennsylvania have decided to go virtual for the whole school year, others are returning to the classroom using a “hybrid” model. That means they attend classes in person two days a week and go virtual the other days.

But as anyone who’s done virtual learning can tell you, it’s hard to stay focused on your classes when you’re in your home or bedroom all day. It’s also difficult for parents, who can’t go to work (or focus on work) if they have to be at home watching their kids. 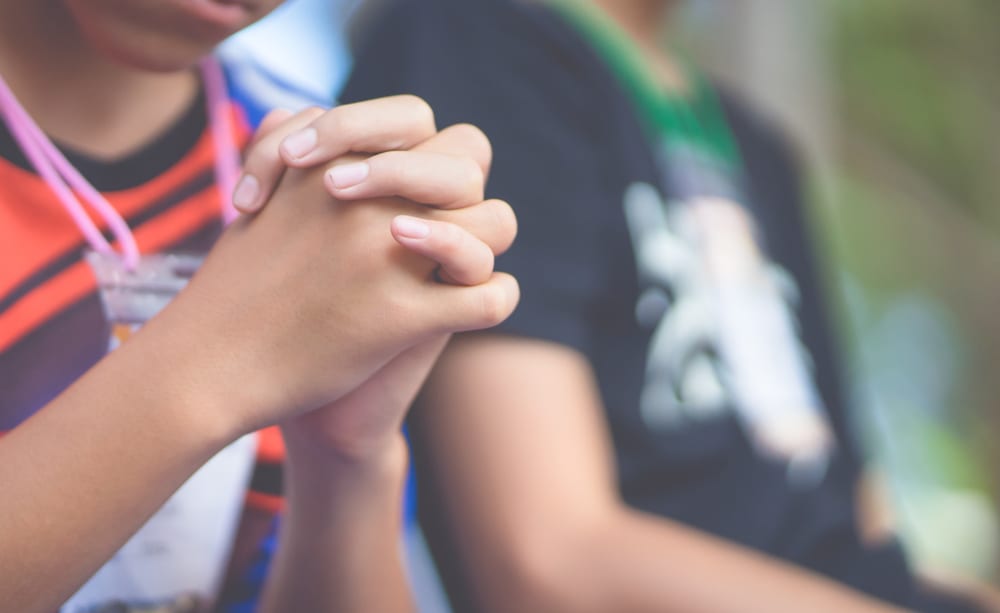 So WASD decided to partner with a local organization called Camp Susque (among others) to help families out. Kids ages 5-8 can be taken to a Camp Susque location where there’s internet, food, oversight, and a chance to be around their classmates while still wearing masks and keeping their distance.

The undertaking goes far beyond supervision of area students. Kids are being fed, offered transportation and engage in activities on top of their digital curriculum.

… the county is stepping in to help, Lycoming County commissioners publicly offered their support for the initiative last week, pledging assistance via CARES Act relief funding.

“The hybrid model disproportionately impacts working families, or families with single parent households. So the opportunity to support those families is a really important thing for us.”

All of that sounds really great — for families, for students, for the district itself.

But here’s the problem: Camp Susque is a Christian camp with a self-described mission of “Biblical evangelism.” The camp’s website says its goal is “introducing campers of all ages to our God and Creator, the Lord Jesus Christ, as proclaimed in His Word, the Bible.”

Why is a public school district partnering with a Christian organization with a goal of evangelizing?!

Maybe, you think, they’ll turn off the “Christian” switch when WASD kids are there. It might look like a problem, but we don’t have to worry because safeguards are in place to make sure WASD students still receive a secular education, right?

Check out this exchange on the Williamsport Sun-Gazette‘s Facebook page, under a story about this partnership, between a concerned resident and the camp’s director Peter Swift. 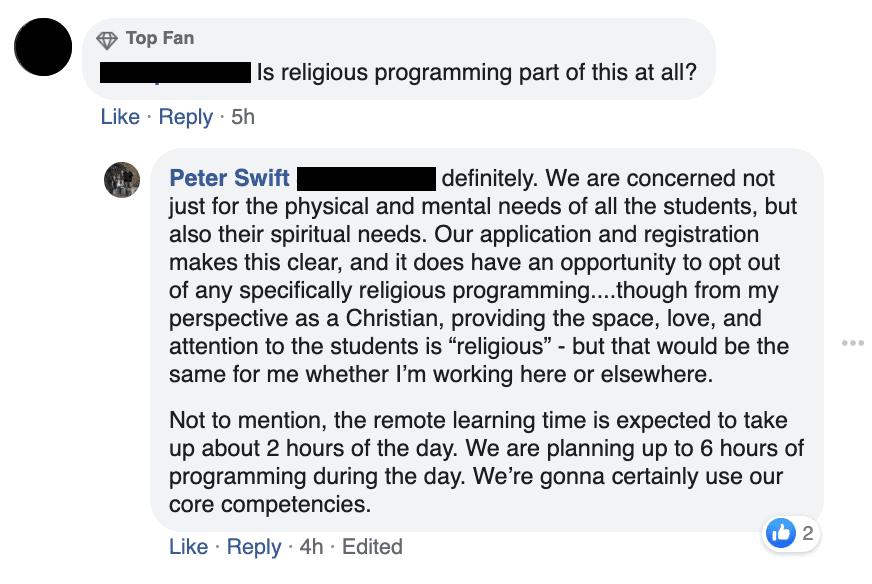 [Is religious programming part of this at all?]

PETER SWIFT: … definitely. We are concerned not just for the physical and mental needs of all the students, but also their spiritual needs. Our application and registration makes this clear, and it does have an opportunity to opt out of any specifically religious programming….though from my perspective as a Christian, providing the space, love, and attention to the students is “religious” – but that would be the same for me whether I’m working here or elsewhere.

Not to mention, the remote learning time is expected to take up about 2 hours of the day. We are planning up to 6 hours of programming during the day. We’re gonna certainly use our core competencies.

In short, unless parents go out of their way to say “no proselytizing,” kids will be preached at… for several hours a day.

Some kids who aren’t Christian — and whose parents aren’t raising them in Christianity — may be coerced into going along with it because their classmates are doing it too. This is nothing more than target practice for Christian zealots using local schoolchildren. If it took place in the building, it would be an open and shut violation of the Establishment Clause. That doesn’t change just because the learning is happening in a remote location.

It’s a bait-and-switch. They’re offering free space to the local school district… in exchange for fresh meat. And the district is going along with it.

For the same reason graduation ceremonies can’t be held at churches or include Christian prayers, remote learning for children cannot involve a heavy dose of Christian preaching. Just because there’s an opt-out option doesn’t make it legal.

Whether this continues remains an open question. The Freedom From Religion Foundation has been informed of the violation.

September 5, 2020
Coach Who Said Biden Was Catholic "In Name Only" Will Receive Medal of Freedom
Next Post