For decades now, there’s been a law in California that provides some room for discernment regarding a troubling issue.

If a man is convicted of statutory rape — let’s say because he’s 20 and the girl is 16 — then a judge has the power to decide if the man should be placed on the sex offender registry. Why is that not automatic? Because going on such a list would effectively block someone from finding work in the future, and if the girl becomes pregnant, it would become even harder for the man to support her and the child. Basically, a judge has the power to decide if a man who’s already been convicted of a crime should get this additional punishment.

There’s a perfectly valid argument to be made that, yes, he should automatically go on the sex offender registry because our society says an underage girl can’t legally consent. So it doesn’t matter if they’re in a “relationship,” or if she says she wanted to have sex, or if she says he did nothing wrong. She was underage. He should be punished to the fullest extent of the law. End of story.

But here’s the current dilemma: While California law allows a judge to decide if that man should be on the sex offender registry, that’s only true in the case of an older man and a younger woman who have vaginal intercourse.

Maybe you would argue, Good! That’s what should happen! But the point is that there’s a difference. In practice, what that means is that a straight man who is convicted of statutory rape could get a lighter punishment than a gay man convicted of the same thing (because, obviously, no vaginal intercourse would be involved).

The California legislature just passed a bill, SB 145, sponsored by State Sen. Scott Wiener, that would treat all of these cases the same way: 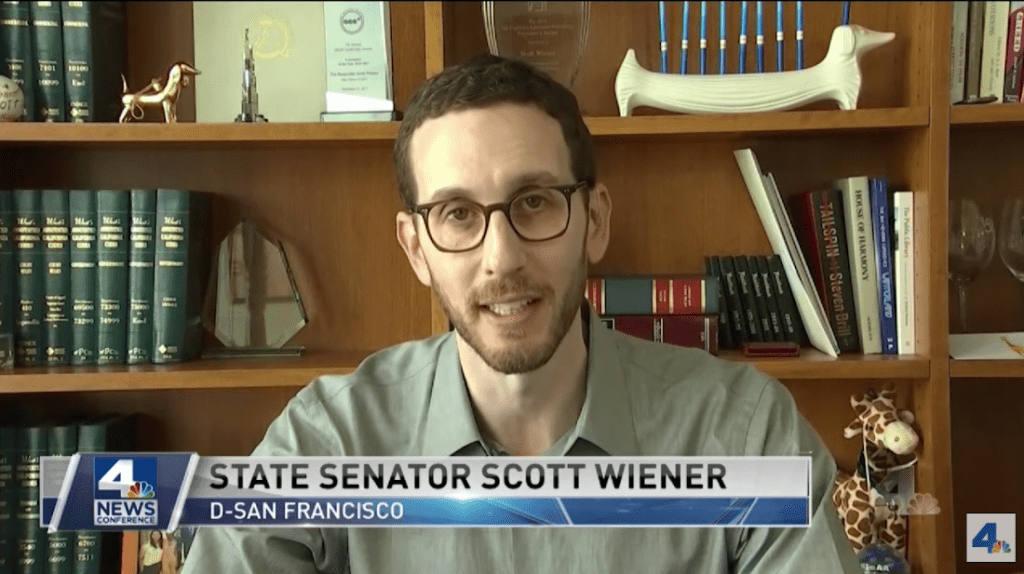 Just to restate that, the bill would treat a gay man who commits statutory rape the same way the law currently treats straight men. That’s it.

Again, you can argue offering any kind of leniency in this situation is wrong, and that all of these people should be placed on the sex offender registry — in fact, some lawmakers have been arguing exactly that — but that’s a separate issue.

Statutory rape is still a crime. It can be charged as a misdemeanor or felony. The bill doesn’t apply to cases of forcible rape.

What Wiener has done is remove a legal relic that unfairly punishes gay men worse than straight men for the exact same crime. That’s all. As he said on the Senate floor, “This eliminates discrimination against LGBTQ youth in our criminal justice system.” He’s not alone in pushing for this change, either:

The measure is supported by LGBTQ rights groups, which warn that young people are vulnerable to unfair punishment for gay and lesbian relationships… as well by as organizations representing district attorneys and police chiefs.

Here’s a clear example of how this could play out: Judges may see cases in which a 19-year-old is convicted of statutory rape against his 15-year-old girlfriend. They began dating in high school and he just graduated. Should that 19-year-old be placed on the sex offender registry? That’s where there’s a grey area in the current law… for straight couples. But if the people involved are both male, there’s no grey area at all. This bill is meant to fix that.

But you can see why this gets murky for people who don’t understand — or who choose to ignore — all these details: They’re claiming this bill is somehow granting leniency to 24-year-old men who rape 14-year-old boys. That’s not true. It’s hard to even imagine a situation in which any judge would be lenient with the rapist in that situation.

And yet, the Christian publication Charisma says this bill would “Soften Penalties for LGBT Sex With Minors.” Conspiracy theorist Michael Brown used a similar anti-gay headline. So did the hate-fueled Illinois Family Institute.

They make it sound like California lawmakers want to make it easier for LGBTQ adults to rape kids. Bullshit. That’s not true. Those Christians are lying. So are people spreading lies on social media about what this bill does and who it affects.

It doesn’t help that this nuance is hard to convey in a tweet. (Just read the responses to this one…)

Gov. Gavin Newsom should sign this bill since the current law punishes gay people more harshly than straight ones for the exact same crime. It’s that simple. Everything else people are saying is a distraction.