The Most Antiquated Part of Mississippi’s New Flag May Soon Be “In God We Trust” September 3, 2020 Hemant Mehta

Besides getting rid of the racist symbol, there was just one rule: The new flag had to include the words “In God We Trust.”

The “Commission to Redesign the Mississippi State Flag” has now selected its replacement option, and it’ll be on the ballot for voters to approve in November. 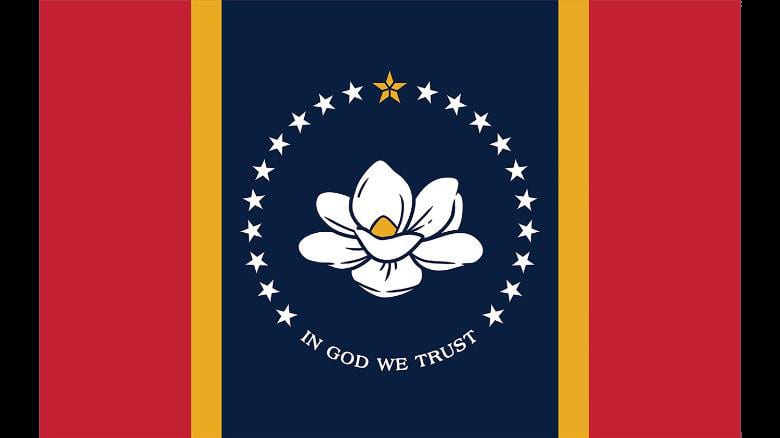 “The New Magnolia Flag” features a white magnolia blossom surrounded by a circle of 20 stars, representing Mississippi’s status as the 20th US state.

The flower is fitting for the Southern state. Mississippi is nicknamed the Magnolia State and the magnolia is the state flower and tree.

At the top of the circle of 20 stars is a gold five-point star to reflect Mississippi’s indigenous Native American tribes.

Better than the previous version, no doubt. But this means the worst thing about the state’s flag will now be the gratuitous mention of God. As I’ve said before, if the goal is to unite people in the state, then bringing everyone under the umbrella of Christianity, or even generic theism, makes no sense. (And let’s be honest: “In God We Trust” is a Christian phrase no matter how much they try to pretend it represents all people of faith.)

Nearly 20% of the state is non-Christian. 14% aren’t affiliated with organized religion at all. This is just a new way to inject God into government.

September 3, 2020
Sheriff Resigns After Defending His Use of Racist Slurs: "I’m a Christian Man"
Next Post

September 3, 2020 A Coalition of 350 Progressive Religious Leaders Are Endorsing Joe Biden
Browse Our Archives
What Are Your Thoughts?leave a comment