Todd White, a self-described former “drug addict and atheist,” now tries to bring people to Jesus through his “Lifestyle Christianity” ministry. Last year, he gave a sermon in which he explained how he knew someone with one leg shorter than the other due to polio… but don’t worry! White used prayer and helped grow that leg back to regular size!

(No video of that miracle is available. Shocking.)

But now it’s just getting creepy.

In a sermon posted to YouTube on Tuesday, White talked about how God is everywhere.

Literally everywhere. In your bedroom, even.

He’s also watching you when you go to adult websites… and waiting for just the right moment, apparently.

… your whole pornography thing. You think, like, no one knows it? God’s watching it with you! He waits till you reach climax.

Do I even want to know why I’m supposed to want to “be His climax”…?

And who knew God was like Jerry Falwell, Jr., watching you in the bedroom until the fantasy is over — and then apparently leaving! (What happens afterwards?!)

Between purity culture and sexual abuse, evangelical Christians have done enough sexual damage to people. The last thing anyone needs to hear is that God will punish them for their thoughts in addition to their actions.

No amount of “I love Jesus” mixed into the sermon makes any of this okay. 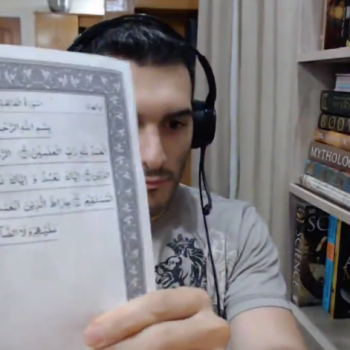 September 3, 2020
This Atheist Wants People to Desecrate the Qur'an for No Useful Reason
Next Post