A group of researchers say that public school principals in the U.S. discriminate against atheist and Muslim families, and the way they made this claim is fascinating. 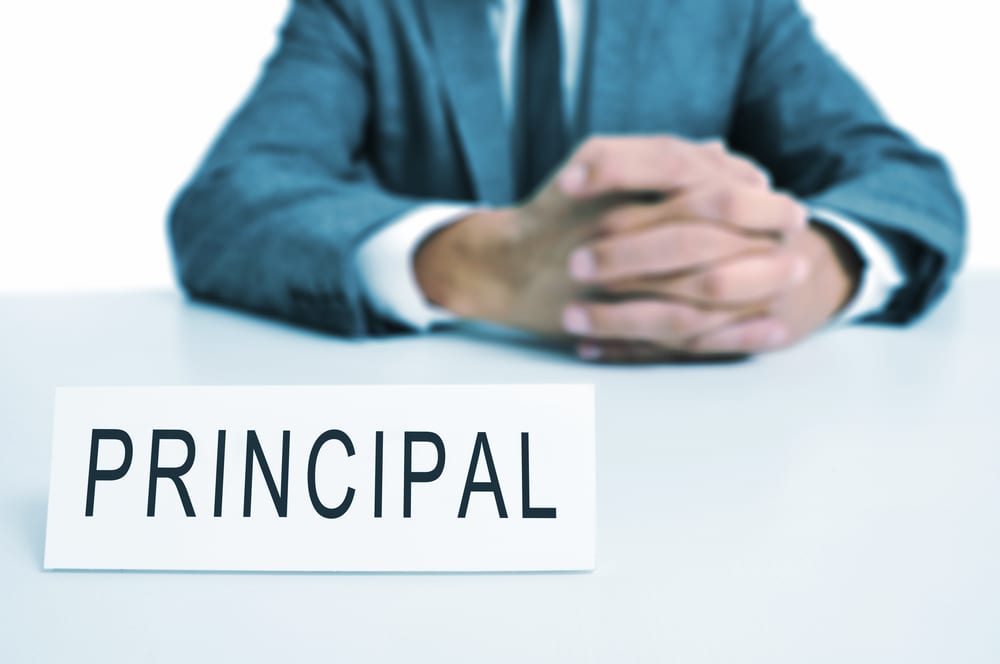 The new paper was published in the journal Public Administration Review, and it’s the work of Steven Pfaff (University of Washington), Charles Crabtree (Dartmouth College), Holger L. Kern (Florida State University), and John B. Holbein (University of Virginia). They conducted this research because they say there’s very little information on whether “street‐level bureaucrats” (like principals) treat people differently based on their religious identities.

So here’s what they did: They emailed the principals of roughly 45,000 schools (pre-K through 12th grade) in 33 states. They posed as parents who wanted to enroll their kids in those schools… but wanted an in-person meeting with the principal before making the final decision.

Some of the emails included a (fake) quotation that served to identify the family’s faith. For example, when pretending to be a non-religious family, the end of the email included this line:

Atheism teaches that life is precious and beautiful. We should live our lives to the fullest, to the end of our days. – Richard Dawkins.

Other versions of that quotation, with a different first word, were attributed to Pope Benedict (Catholic), Rev. Billy Graham (Protestant), and The Prophet Muhammad (Islam). These were all considered “low-intensity” requests because those quotations were the only indication of the family’s faith.

Other emails, considered “medium-intensity” requests, included that quotation along with an additional line in the email. Here’s what the “atheist” emails included:

One of the reasons we would like to meet with you is that we are raising [Jonah/Sarah] to be a good Atheist Humanist and want to make sure that this would be possible at your school.

Finally, some of the emails, considered “high-intensity” requests, included the quotation along with a slightly different line in the message. Here again is the atheist version:

One of the reasons we would like to meet with you is that we are raising [Jonah/Sarah] to be a good Atheist Humanist and want to protect [him/her] from anything that runs counter to our beliefs. We want to make sure that this would be possible at your school.

So they sent different versions of those letters (e.g. low-intensity Atheist, medium-intensity Muslim, high-intensity Protestant, etc.) to all those principals, and they waited to see how many replies they got. They also sent “control” emails to some people that didn’t identify any religion at all.

They found that the emails purporting to come from Muslim or atheist families received significantly fewer responses than the Catholic and Protestant ones — and that was especially true when the “intensity” of the beliefs grew higher. 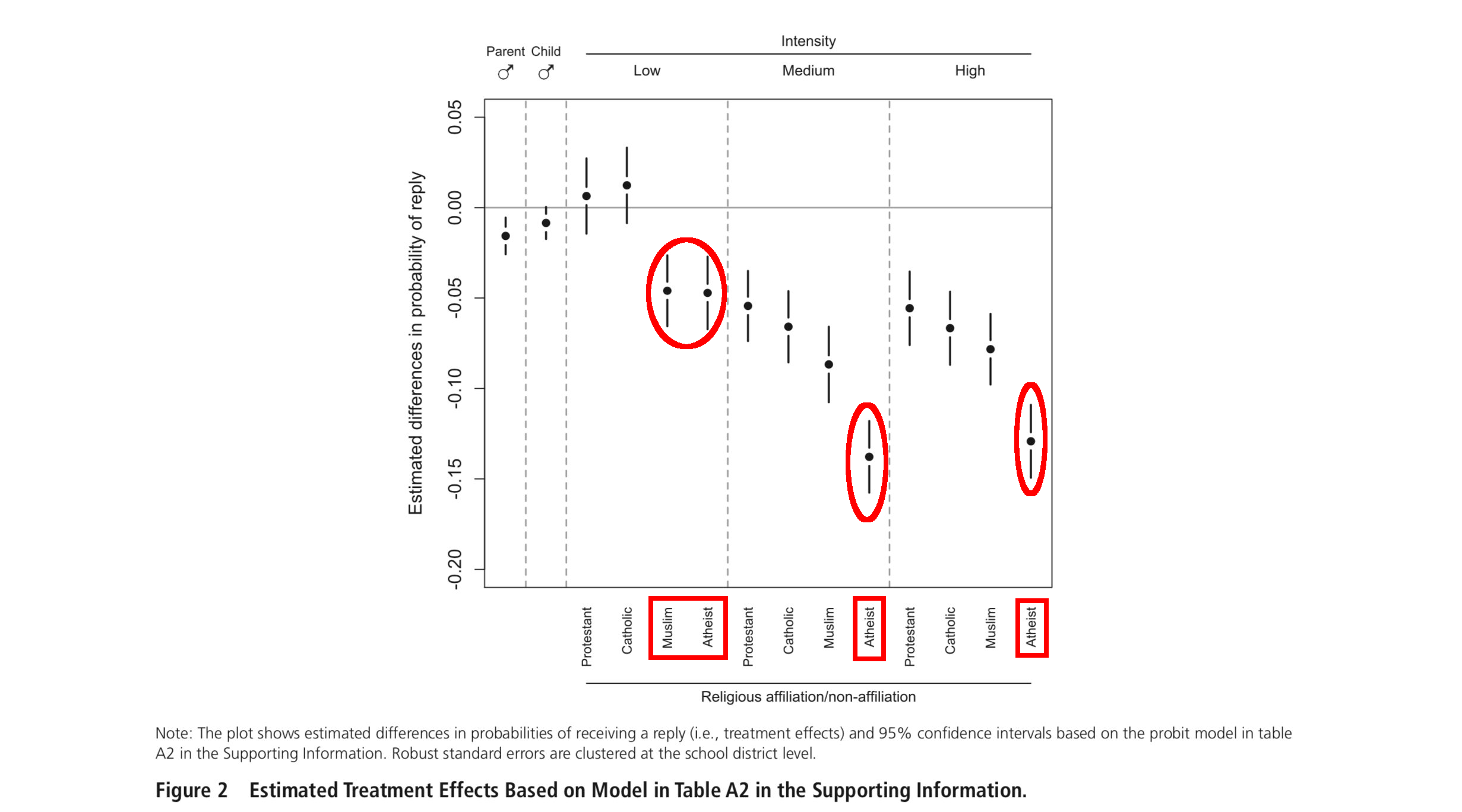 … We found that Muslim and atheist parents are discriminated against for merely revealing their beliefs in the signature part of their emails. Signaling membership in these groups decreased the probability of a reply by 4.6 and 4.7 percentage points, respectively. This difference is statistically and substantively meaningful; it is only slightly smaller than (but not statistically distinct from) the discriminatory effects of race/ ethnicity shown in previous correspondence studies…

For Muslims and atheists, discriminatory effects are present regardless of whether enrollment costs are explicitly signaled. Moreover, discrimination against Muslim and atheist parents increases dramatically if they inquire about the compatibility of the school with their beliefs or ask for religious accommodations, with such signals reducing response rates by 8.7 and 13.8 percentage points, respectively.

Maybe the most shocking thing about those results is how much a simple quotation attributed to Dawkins or Muhammad — and nothing else — was enough to lower the response rate.

These results held true regardless of the schools’ racial/ethnic makeup, median income, and “religious adherence rates of the surrounding communities.” The bottom line is that discrimination against non-Christians appears to be rampant, at least if you use this innocuous approach.

If principals are less likely to even meet with families that are openly non-Christian, what chance is there they will defend those students if they encounter faith-based problems during the school year? What if those students don’t want to stand for the Pledge of Allegiance? What if they want to form an atheist or Muslim student group? What if there’s Christian proselytizing occurring in the classroom?

You would hope public school principals would stand up for students regardless of their religious beliefs, and respect religious neutrality since that’s what their job requires, but now we have evidence that this implicit discrimination against non-Christians permeates our schools.

Obviously, this sort of experiment has limitations. Perhaps it’s unfair to extrapolate so much from one email. The researchers are aware of it and acknowledge it in the paper. But they also say this should be a starting point for further research:

… Practitioners and public administration scholars need to realize that the current state is not equitable. Religious discrimination is sizable and systemic. Acknowledging this fact alone is an important first step for administrators to take. Next, practitioners and scholars alike must act to come up with new ways to ensure that families are, in practice, given the protections they are legally entitled to.

It’s an extremely interesting starting point. Unfortunately, it confirms what many atheists and Muslims, I imagine, could have told you anecdotally. 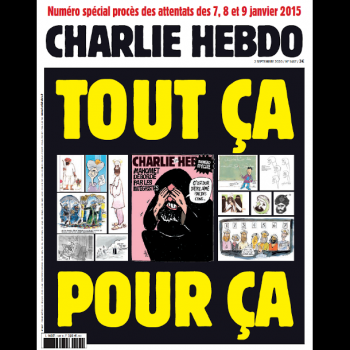 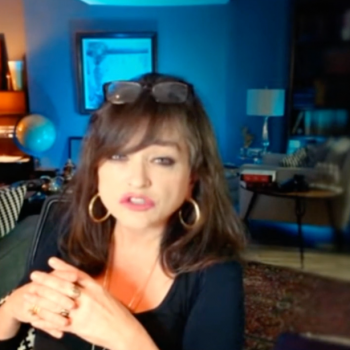