A few months ago, Scotland was on the verge of banning the “crime” of blasphemy. The nation had proposed a new Hate Crimes Bill, designed to modernize the law, that included a clause abolishing “blasphemy” as a crime. That was great news!

But the draft bill included a section that criminalized “stirring up hatred” against various groups… including the religious.

Somehow, blasphemy would be eliminated… but hurting religious sensibilities could be prosecuted. It made no sense and it failed to resolve the problem it was attempting to fix.

The National Secular Society, among other groups, has been sounding the alarm about the problem.

But here’s a more amusing side of this controversy.

Earlier this week, a letter to the editor appeared in the newspaper The Courier. Written by an atheist, it celebrated the Hate Crimes Bill because it would allow atheists to prosecute “all Scotland’s religions and their Holy Books.”

Atheists see some merit in Justice Secretary Humza Yousaf’s Hate Crime Bill, as it will enable the prosecution of all Scotland’s religions and their Holy Books for spreading hatred.

It is utterly unacceptable that in progressive, social democratic Scotland that squalid, Bronze Age village disputes, as described in the Holy Books, about control of women, goats or water should give Scotland’s “Holy Willies” authority to spout out vitriol against atheists, agnostics, apostates, sceptics, non-believers, women, trans people and homosexuals.

We fully intend to monitor all Holy Books, sermons in places of worship and the social media accounts of the various religions and report any hatred to Police Scotland for criminal investigation.

Here was an atheist saying — tongue in cheek, it seems — that if offending a religious group was a punishable offense, the same rule would allow him to go after anyone promoting the Bible since the book and its followers could be deemed guilty of “hate” against non-believers, LGBTQ people, women, etc.

It certainly got the attention of the non-profit Christian Institute:

Simon Calvert, Deputy Director for Public Affairs at The Christian Institute, warned against “the dangerous new ‘stirring up hatred’ offences”, saying that “they will give politically-motivated complainants like Mr Stewart a powerful weapon against their ideological opponents.”

He commented: “The threshold of the proposed offences is so low that Mr Stewart might well be able to persuade a police officer that certain unfashionable Bible verses or sermons are ‘hate crimes’. Does the Scottish Government really want to expose church ministers to the risk of prosecution at the instigation of anti-religious zealots?

That wasn’t all. A Christian writer by the name of David Robertson wrote his own letter to The Courier making similar points:

… There are two problems with this — firstly Mr Stewart regards any disagreements with any of his fundamental beliefs as self-evident ‘hate’ and we must thus be dealt with. He is in effect saying that we should all be closed down unless we accept his authoritarian morality.

Secondly, I regard his letter as full of hate speech and therefore under the criteria of the new law Mr Stewart should hand himself in to the police and confess his crime. But tolerance and logic are not what this new blasphemy bill is about. Rather it is intended to reinforce the self-appointed thought police of the Brave New World that the Scottish Government are seeking to build….

Holy shit. Those Christians responded to the apparently satirical letter by making the exact point atheists have been trying to make for months.

I can’t believe it worked. The Times has also picked up on his letter.

It’s not even the first time Stewart has used satire to make a point about religion.

In 2013, when marriage equality in Scotland was being debated, Robert Canning of the Scottish Secular Society made the perfectly sensible argument that same-sex marriage wouldn’t lead to polygamy as some conservatives were arguing. Stewart then wrote a letter to The Scotsman newspaper reacting to that statement… by pushing even further. He lashed out at the atheist for condemning polygamy.

In his rush to condemn polygamy, and by extension polyandry, Robert Canning of the Edinburgh Secular Society sounds as conservative as the religious conservatives he claims to oppose… Polyandrous and polygamous marriage will not devalue or undermine the validity of homosexual or heterosexual marriage in any way whatsoever.

I don’t know if this was the goal, but that letter — which was also opposed by the Christian Institute — certainly made Canning seem downright reasonable by comparison. Same-sex marriages were legalized in Scotland a few months later.

You ready for this?

As far as I can tell, “Ian Stewart” doesn’t even exist. He says in his letters that he’s the “Convener” (chairman) of Atheist Scotland… but that’s not a real group! There’s a Facebook group with that name but the person who runs it told me yesterday there’s no “Ian Stewart” associated with it.

Professor Paul Braterman, an Honorary Senior Research Fellow in Chemistry at the University of Glasgow and science advisor for the Scottish Secular Society — a group that also told me they’re not familiar with Stewart — told me that, real or not, his letter makes an excellent point:

He is pointing out most effectively the double standard being used by the religious when they complain about being criticised, while they themselves go around saying things like unbelievers are going to suffer for eternity, and serve them right. Specifically, Leviticus condemns homosexuality as an abomination, and this is clearly an offence against the draft hate crimes bill.

In a way, “Stewart” is doing what Bobby Henderson did when he first wrote a letter about the Flying Spaghetti Monster. That letter pointed out an obvious problem with bringing “Intelligent Design” into public schools as Kansas officials were seriously considering: If you allow one religious perspective in the classroom, why not another?

“Stewart” may be fictional, but the points he raises are real and important.

It looks like some Christians are already taking the bait. 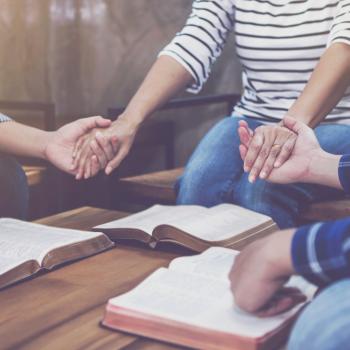