(This may be a story about celibacy, but there’s sexual assault involved, for anyone who needs to know that.)

He’s been making videos for YouTube since childhood, but 21-year-old Anthony Quintal — known on YouTube as iconic queer vlogger Lohanthony — says his recent video renouncing his sexual orientation is the hardest he’s ever had to make.

It’s been hard on his fans, too.

Lohanthony takes pains to explain to his viewers that he’s “not here to say what is and isn’t sinful” before spending just over 40 minutes talking about why he feels compelled to divorce himself from his sexual orientation, described as “a topic that has been living in the darkness of my heart.”

Known for his vibrant off-the-cuff commentary on pop culture, politics, and everyday life, Lohanthony literally reads from a script as he speaks about sin, shame, brokenness, and fallen nature.

The abrupt tonal shift from someone who became an LGBTQ icon by talking proudly and confidently about his sexual orientation leaves some fans wondering whether somebody put Lohanthony through conversion therapy.

Lohanthony’s testimony echoes conversion therapy talking points when he connects his homosexuality to an early experience when an older boy molested him at a home daycare. The idea that same-sex attraction is a mental disorder that develops out of traumatic sexual experiences is popular in conversion therapy.

To Lohanthony, that initial experience set him on a path of lost innocence:

The truth is, childhood trauma can cause people to develop unhealthy coping mechanisms… but these typically don’t include energy drinks and petty theft, nor a tendency to fall in love with people who share your gender.

As he talks about his feelings towards the boy who abused him, Lohanthony appears to derive genuine comfort from Christian concepts like forgiveness and God’s unconditional love, even as he struggles to separate that love from the rhetoric of sin and wickedness:

God gave me the answers, that He is Love no matter what, and that anything that we encounter other than that love is not of God, is not holy, and most likely is of the enemy, of the fallen nature of humanity.

Imagine making that statement in a video arguing that love is sinful under certain circumstances. Lohanthony appears unaware of the irony.

The tragedy, of course, is that many people who find parts of Christianity comforting or helpful in dealing with adverse experiences get sucked into an anti-LGBTQ narrative that they inevitably feel compelled to push onto others.

Pro-LGBTQ Christian Matthew Vines, executive director of The Reformation Project, says that Lohanthony’s embrace of “Christian celibacy” is part of a new approach to conversion therapy that recognizes the impossibility of making gay people straight, but still wants them to feel bad about it:

It’s no longer popular, even in a lot of conservative churches, to uphold a true gay-to-straight narrative, the idea that all gay people could do that if they just tried. But there’s kind of been a reconstructed ex-gay movement that acknowledges that maybe you can’t actually flip the switch from gay to straight, but you can still have a more vague kind of transformation of your sexuality. It could be lifelong celibacy, it could be a mixed-orientation marriage, it could be any number of things.

Vines adds that traditional conversion therapy may or may not be a factor here; many conservative churches offer up similar rhetoric regarding same-sex attraction, and it’s just as likely that Lohanthony learned the ideas from a sermon, pastoral counseling, or Christian media.

As painful as it must be for Lohanthony’s largely queer audience to watch him scrub his entire back catalogue from his channel and flood his social media with Bible quotes, the community seems to be reacting with concern, rather than anger. Meanwhile, Christian followers have been love-bombing him in Instagram comments.

It’s hard to balance LGBTQ identity with a search for spiritual meaning in a country that’s heavily influenced by evangelical Christian culture. Likely it’s even harder to do so under the watchful eye of a public following.

Here’s hoping Lohanthony finds a way to reconcile what he believes with who he is, and that he finds a less harmful path to what he’s looking for. 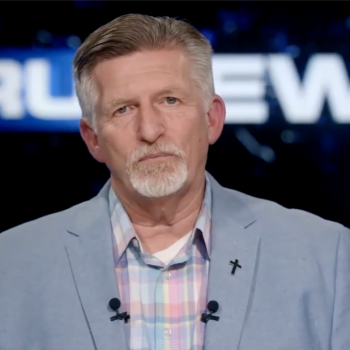