Why Is a Man Who Wrote a Book on the “Evils” of Islam Still a Naval Chaplain?

18 years ago, in the emotionally fraught months following 9/11, Oklahoma pastor Brian Waite wrote a book in which he expounded on his theory that the terrorist attacks took place specifically because Islam — the entire religion, in all its forms — is inherently “evil.” 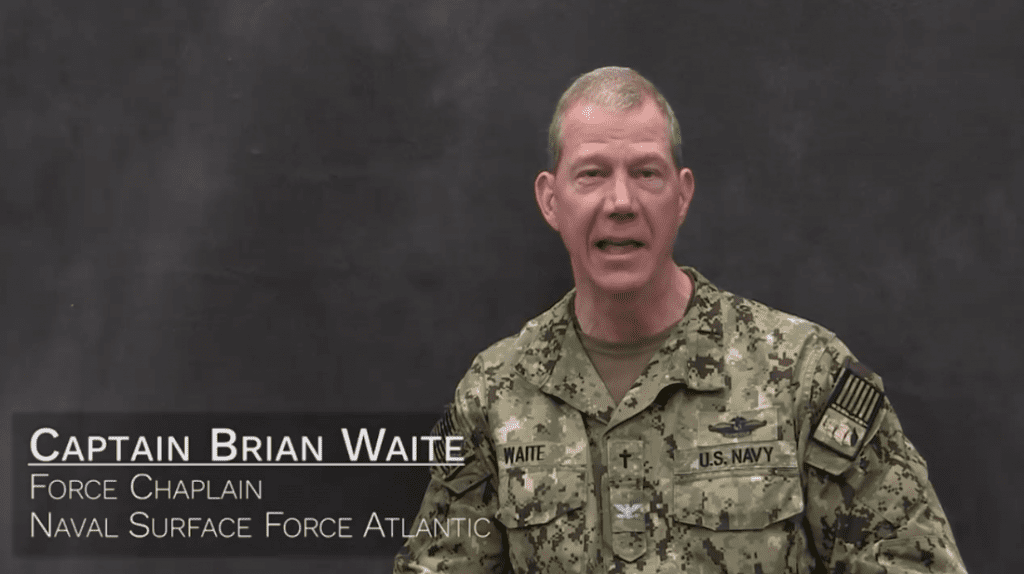 Before he took a pastoral position with an Oklahoma City church, Waite served as a military chaplain in the early 1990s. He returned to active chaplaincy mere months after the publication of Islam Uncovered — and after admitting to academic dishonesty in writing and marketing it.

Now, in 2020, concerned advocates are still trying to get him removed from the chaplaincy.

The book Islam Uncovered was published by a tiny Christian press in the early days of 2002, and almost immediately scrapped because of its xenophobic content, failures of attribution (read: word-for-word plagiarism from sites like WorldNetDaily), and dishonest marketing (by which I mean he composed made-up endorsements, attributed them to famous religious leaders, then printed them without the knowledge or permission of the people “quoted”).

At the time, Waite said he stood by the ideas he expressed in the book, but he thought it “in the best interests of all parties” to stop sales, adding that he believed he had been marked for death by Muslims for what he had written. He ordered the remaining unpurchased copies destroyed.

But Waite’s words remain in the copies that weren’t destroyed and in the news media reports on the book at its release, and they’re unapologetically anti-Islamic. What’s more, Waite shows no signs of understanding why that might be a problem:

My words may make a number of Muslims in this country and abroad very uncomfortable. To them I would say, “Deal with it!” The suspicion that you encounter is merely a consequence to your own belief system… What about the religious infrastructure that has created the terrorist by teaching them to hate and kill anything that does not fit their mold? Should Islam be immune from attack because it calls itself a religion? If Adolf Hitler called Nazism a religion, would we be speaking German today? Evil is evil, no matter what nomenclature it hides under.

Having a confirmed Islamophobe leading a Christian congregation would be bad. This is worse. That’s because Brian Waite is no longer a church pastor; he’s a military chaplain with the U.S. Navy, an organization that includes, as of 2015, more than a thousand Muslims.

Muslims in the military have reported issues of bias in the past; it’s common for their fellow soldiers to confuse Islam with Islamic extremism and believe the entire religion is the enemy. The last thing the Navy needs is a chaplain encouraging Christian supremacy and promoting common stereotypes against Islam.

That’s what the Council on American-Islamic Relations (CAIR) is saying, having recently come across Waite’s less-than-stellar history on the subject. They acknowledge that the book was written quite a while ago, but the passage of time doesn’t guarantee that Waite’s views have evolved. National Deputy Director Edward Ahmed Mitchell says the matter merits a closer look, at minimum:

We urge Navy officials to investigate this matter. If Chaplain Waite has truly changed and hasn’t expressed such bigotry in recent years, that would be wonderful. But if the Navy finds that Chaplain Waite has continued to promote hateful views, he should be removed from his position. Anyone is free to espouse inaccurate and bigoted opinions, but no one who does so should hold positions of authority over our nation’s military personnel.

CAIR-Florida’s communications director Wilfredo Ruiz points out that the military chaplain’s role revolves around supporting the spiritual needs of all service members, regardless of their particular beliefs:

Chaplain Brian Waite’s expressions on Islam and Muslims are incompatible with his oath and our Navy’s mission and guiding principles. Navy chaplains are expected to respect the right of others to hold spiritual beliefs and practices different from our own, and are bound to facilitate for all religious beliefs.

Waite is certainly not the only chaplain to fall short of that ideal, according to reports from active soldiers. When the Military Religious Freedom Foundation spoke against Waite’s appointment in 2008, its founder Mikey Weinstein said he found Waite’s Christian supremacism typical of the American military chaplaincy as a whole:

The majority of chaplains in the Armed Forces today… see the military as a mission field, filled with low-hanging fruit in a target-rich environment for fundamentalist Christian evangelizing and proselytizing.

Apparently, Waite is a poor chaplain by those standards as well. Even as he tries to push Christianity onto his unchurched charges, he denied baptism to several active-duty Marines in Iraq who actually wanted it in advance of a dangerous mission, saying he felt they weren’t ready to make the commitment.

When asked about his work by the Virginian-Pilot, Waite defended the book as “a treatise of theological differences” from which certain statements had been taken out of context. (He declined to expound on the context he thought would mitigate the use of the word “evil” to describe an entire religion.)

He also cited the book’s age as a mitigating factor, saying he’s changed since he wrote it:

I want to be perfectly clear, my thought process and language has matured over the past 20 years. I do not hold any animosity or hatred towards Islam or any other religion or non-religion. I hold every individual in the highest regard and treat all equally with love, tolerance, and respect. The intent of the book was to bring about positive dialogue and understanding during a very difficult time.

Again, he failed to clarify how he thought he might achieve that intent by comparing Muslims to Adolf Hitler.

As for the chaplain’s office, they’re standing behind Waite. For them, it’s good enough that the book was published “while Chaplain Waite was not a Sailor and was not coordinated with the Navy.” They have no plans to investigate whether he continues to hold or promote those views. 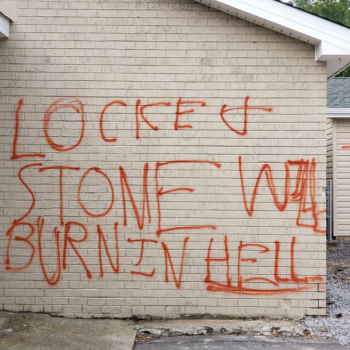 August 24, 2020
Someone Vandalized the Tent-Church of MAGA Cultist Pastor Greg Locke
Next Post