Robert Jeffress: The DNC Wasn’t Specific With Its God-Talk, So It Doesn’t Count August 22, 2020 Hemant Mehta

Robert Jeffress: The DNC Wasn’t Specific With Its God-Talk, So It Doesn’t Count

Given all the faith-talk during the Democratic National Convention, Republicans can’t just use their old worn-out lines about how Democrats are godless heathens.

Evangelist Franklin Graham just pretended the whole convention never really happened. He lied and said there was an “absence of God” during the speeches — by which he obviously meant people didn’t use Jesus as a weapon against LGBTQ groups.

Now comes MAGA cultist and Trump sycophant Pastor Robert Jeffress, who just last week claimed the Democrats were a “godless party,” shifting his rhetoric during a FOX News appearance yesterday and saying Democrats weren’t specific enough about which God they were talking about.

… So they’ve come up a way to appeal to faith voters without offending their secular audience, and that is, they talk about faith in some ethereal undefined way.

You hear them talking this week about, “Oh, his faith is so important to him,” and “Oh, his faith helped him in a troubled time,” but they never define what that faith is!

Is it faith in himself? Faith in other people? Faith in the Tooth Fairy? What kind of faith is it? And the few who dare utter faith in god, then you have to ask, Greg, which God? The God of their own imagination? The God of Planned Parenthood? Or the God of the Bible?

This is Christian Nationalism in a nutshell. It’s not about faith. It’s not even about Christianity. It’s about a version of Christianity that demands women give birth against their will, wants LGBTQ people to go back in the closet, celebrates refugee children who suffer, and protects the Lord and Savior Trump at all costs.

For what it’s worth, Biden is Catholic. So his God is presumably the same one Jeffress pretends to care about. Ditto for the numerous people who offered invocations and benedictions. But guess what? There were non-Christians who also spoke about their faith, and there were non-religious people speaking about their values during a daytime event. That’s how it works when you belong to an inclusive party.

Jeffress doesn’t give a shit about anyone who doesn’t practice his exact version of rage-fueled Christianity.

What does Jeffress call a Christian who agrees with 99% of his beliefs? A heretic. 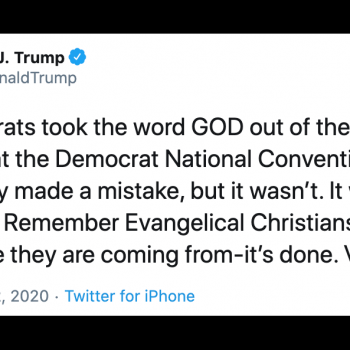 August 22, 2020
A Lying Trump Claims Democrats Nixed "God" from the Pledge During the Convention
Next Post