Christian Author: Kamala Harris Was Only Selected Due to “Identity Politics”

As if he’s in any position to critique other people’s mental fitness.

During a radio show last week with guest (and Trump lawyer) Jenna Ellis, Metaxas claimed Harris was picked only because of her identity — as if the only accomplishment to her name is the color of her skin — before discussing Biden’s brain.

I was gonna say it’s — identity politics is really the term. So, the idea that Biden boxes himself in and says, ‘It’s got to be a woman.’ And then he says, ‘It’s got to be a woman of color.’ It’s so bizarre. In other words, instead of thinking, ‘Who’s the best person I could possibly choose?’ It would be nice if they’re a woman or be nice if they’re a woman of color,’ but the idea that he kind of boxes him in, so then he’s got a choice of like three or four people and then he picks Kamala Harris. And I thought it gets so absurd. Because her husband is white, her mother is from India — is Indian — her father is from Jamaica, she grew up in Canada — like you start thinking, ‘What are we — like what world have we gotten into that this is the kind of thing that to we want to focus on? I mean, it’s just, it’s madness to me, because she is, in many ways, I think, a horrible thought as president — like a nightmare. But just the idea that Joe Biden is reduced to this kind of identity pandering, it’s just, you kind of think, ‘Is that really what we want to do?’

Leave it to someone ignorant — who has no problem propping up an utterly incompetent white male president — to dismiss a thoroughly qualified woman of color. Biden didn’t pick a woman of color who couldn’t handle the job. He picked someone who absolutely could from a pool of people who have traditionally never been given that opportunity because the country has always been run by people like Metaxas.

A guy who can’t even handle the thought of Jesus not being white has no chance of accepting a national leader who’s not either.

I should clarify that. He can’t accept a white man who’s a Democrat either.

Metaxas portrayed Biden as a Manchurian candidate, a “cardboard figure” being propped up, “a cipher, a husk, a front man for the most radical elements in the party.” Metaxas also implied that Biden is cognitively unfit for office and that “behind the scenes, the party mandarins, the elders, are scheming.” He added, “I don’t get the impression that Biden has the energy to be president an hour a day, much less, you know, 18 hours the way President Trump is.” (He didn’t say how many of those 18 hours are spent watching Fox News and rage-tweeting.) Ellis agreed, calling it “just despicable that Biden is the nominee” without having answered questions about his “mental competency.”

There’s nothing Biden could do that would ever satisfy them. There’s no question Biden could answer that could ever make these MAGA cultists say, “Oh! I guess he really is qualified!”

This is what evangelical Christianity has become. It’s a disgrace. But people like these keep getting unearned respect because they always claim to speak in support of Jesus.

August 19, 2020
The Democratic Party's 2020 Platform is a Historic Change for Secular Americans
Next Post 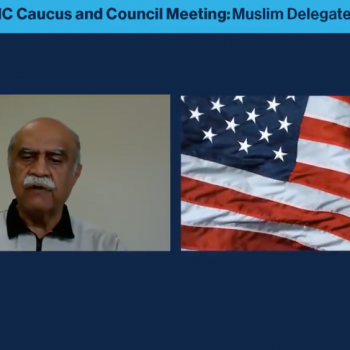