A Catholic priest in New Jersey kicked an autistic child out of his sister’s baptism after he began acting up during the ceremony.

The boy’s mother, Julia Vicidomini, posted the video on Facebook over the weekend along with a note calling the Christ the King Church priest’s behavior “rude and disrespectful.” What’s surprising to me is that the priest somehow acted even worse after the camera turned off.

… Yes, [the child] was playing with a toy where he should not have been, however, the way the priest kicked him out of the church was completely rude and disrespectful. I tried to explain that Nicky has autism and doesn’t understand. We finished the ceremony, put the kids in the car and then Marc went back in to speak to the priest. He explained that our son has autism and he is non-verbal and doesn’t understand. The priest then began to raise his voice and tell my husband that he should not have been playing in church and that it was a distraction to him trying to perform the baptismal ceremony. My husband told him that he thought a priest, of all people, would be more sympathetic to a child with special needs, that he was completely unprofessional and ruined our celebration. He told him our family deserved an apology. The priest came outside to speak to our family but instead of apologizing he began to try to justify the reason he kicked our child out, again saying he was distracting him. At this point, I told my husband let’s go.

Leave it to a celibate priest to have no clue how to deal with children… But even beyond that, like Vicidomini says, this was about a lack of compassion during what would have been an otherwise memorable ritual for the family.

The family says they have now left that church for good.

The Archdiocese of Newark issued an apology for the priest’s behavior, saying he was not aware of how to deal with an autistic child, but that’s a weak excuse. Even if the child wasn’t autistic, to treat any kid that way shows a complete lack of compassion for the parents. The child’s behavior wasn’t bothering them, and they’re who the ceremony was for. If they’re fine with it, why get involved at all?

That’s not to say the priest should be fired. I don’t particularly care what the church does to him. But anyone expecting priests to handle children with the love and compassion they deserve hasn’t been paying any attention to the Catholic Church. 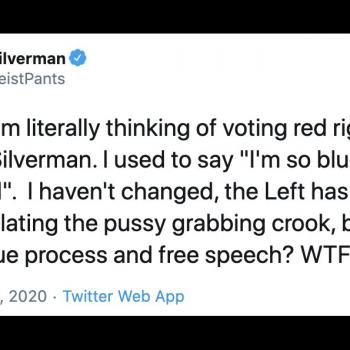 August 12, 2020
Ex-American Atheists President: I Don't Love the Democrats, So I May Back Trump
Next Post

August 12, 2020 Right-Wing Bishop Dismisses Joe Biden's Catholic Faith in Pathetic Attack
Browse Our Archives
What Are Your Thoughts?leave a comment