Roger Stone is the political consultant and adviser to Donald Trump who was convicted of obstruction, witness tampering, and lying to Congress… before Trump commuted his sentenced in July.

Back in March, in his first interview since being sentenced, he said he felt good since he had “taken Jesus Christ as my personal savior.” He also said in July that the people who prosecuted him were “Satanic” atheists.

So naturally, he’ll be spending the morning of August 30 preaching at the church of hate-pastor Greg Locke.

Locke made the announcement during an outdoor, social-distancing-be-damned, mask-free service yesterday:

And so our folks that are watching online, you better book some tickets now, and, uh, start flying here and driving, it’s gonna be a great time…

Though if these churchgoers sincerely accept Locke’s version of Christianity, no doubt they’ll believe whatever Stone tells them. He’s gotten away with lying his entire life and he’s preaching in front of the most gullible people in the country. Why would anyone expect him to change now? 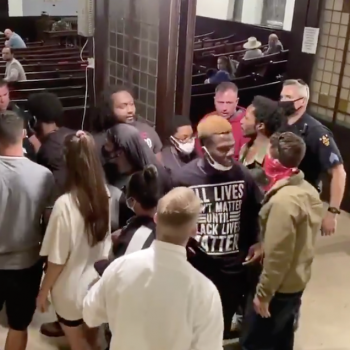