There’s a fascinating story by Anne Helen Petersen in BuzzFeed News that you should check out because it features a radical Christian church, faith-based racism, and the right-wing echo chamber perpetuating a lie. All the greatest hits in a single insane story.

It begins with something readers of this site may be familiar with. Back in June, Grace Baptist Church in Troy, New York held an AR-15 giveaway. They had done that once before, in 2014, and gotten plenty of attention, so they decided to do it again.

But that church isn’t just some random Baptist church. It’s a New Independent Fundamentalist Baptist church. We’ve covered those cult-like churches before — primarily through hate-preachers Steven Anderson and Roger Jimenez. Grace Baptist isn’t formally linked with those other churches, but they’re all under the same umbrella of extremely conservative, KJV-Bible-or-Bust churches that tend to focus on anti-LGBTQ and anti-feminist rhetoric.

In this case, it’s even worse because Pastor John Koletas is racist.

During that 2014 gun giveaway, he said people would be disqualified if their names were “Hossain” or “Mohammed.” He even made church members touch a pork product at the entrance to dissuade “Jihadists” from entering.

Koletas preaches that Black Americans have become slothful and lazy, turning their back on God, and that sin is at the root of every problem in the Black community — a belief that is also held by some Black conservatives…

… [John’s son] George Koletas proclaimed that “those people who are bowing their knees to [Black Lives Matter] are cowards and spineless traitors.”

[BLM protesters] scrolled back a few months in Koletas’s son’s tweets — frequently retweeted by the Grace Baptist account — and saw a picture of a farmhouse with a Confederate flag flying in front of it. “This is the house I grew up in!” he captioned the photo. “That’s how we celebrated MLK Day.”

Given all that, BLM protesters decided to show up to his church when he did that June giveaway. There was confrontation but also de-escalation. Then Koletas decided to do another gun giveaway the next day.

… To the protesters, it felt like a provocation. So they showed up again. This time, the strategy was to hold a peaceful candlelight vigil, with some protesters modeling their own, non-racist racists religious rituals. In practice, this meant the scene was what one protester described as “beautifully chaotic,” with Wiccans practicing rituals alongside a chanting of the kaddish.

When Koletas finally gave his sermon, it wasn’t nearly as inflammatory as other sermons he’s given. But the protesters did what they came to do — and they were escorted out of the building while saying “Black Lives Matter.”

Grace Baptist Church soon had the footage it needed to turn a peaceful protest against a hateful preacher into “evidence” of how BLM was invading churches.

This is where the right-wing echo chamber comes in.

That footage was then shared by disingenuous conservative activists like Charlie Kirk, who said “Christianity is now under physical assault by radical left wing terrorism,” as if BLM was trying to interrupt regular church services. (Kirk, by the way, is still in the good graces of Liberty University, even while his “think tank” buddy Jerry Falwell has taken a leave of absence. It’s another reminder that Liberty U. doesn’t care about truth.) A GOP candidate for Congress shared the video, too, saying her Democratic opponent needed to “defend” the church.

The video was picked up by a who’s who of conservative and fringe media: Dinesh D’Souza, Nigel Farage, Laura Ingraham, OAN, the Daily Wire, the Blaze, PJ Media, and Mike Cernovich… So did RT, the state-controlled Russian propaganda network. The message of the coverage was a variation on the same theme: This is the real BLM, and they’re coming for your churches next.

But as the protesters made clear, they weren’t protesting churches. They have no reason to protest churches. Many of them attend their own churches! They were protesting this church, run by a racist preacher, who thinks giving away a weapon that has caused so much damage is a way to spread the Gospel.

Conservative activists who are always eager to spread out-of-context lies were happy to run with it. Anything to discredit the Black Lives Matter movement and the very idea that systemic racism is real.

August 10, 2020
Convicted Felon Roger Stone Will Preach at the Church of Hate-Pastor Greg Locke
Next Post 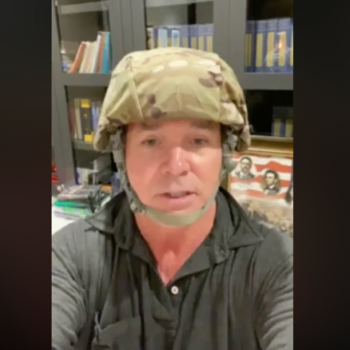