During an interview this morning with Chuck Todd on Meet the Press, White House adviser Peter Navarro claimed that God was the reason Donald Trump could sign four COVID-related executive orders that are arguably illegal.

Navarro said Trump had to act because Congress couldn’t agree on a plan — which is a silly claim considering House Democrats already passed a bill months ago. It’s Senate Republicans who refuse to take any action. But besides blaming both sides for his party’s irresponsibility, Navarro cited God to bolster his argument.

The problem here is Capitol Hill, the swamp. The two Houses that are too far apart. I mean, the Lord and the Founding Fathers created executive orders because of partisan bickering and divided government.

To his usual discredit, Chuck Todd didn’t push back on any of that.

Just to state the obvious — or at least the obvious to anyone not paid by the Trump administration to say otherwise — God didn’t create executive orders. (Or write the Constitution. Or put Trump in the White House. And many of the Founding Fathers didn’t believe in God.) They’re not in the Bible… unless you count God single-handedly deciding to commit various genocides.

To pretend that Trump’s toothless (and possibly unconstitutional) orders are a gift from God suggests both that Trump can’t make good decisions even when he’s making them himself and that the Christian God is too weak to be useful.

By the way, Trump himself derided such unilateral decisions when his predecessor used them. Somehow the Christian God hated it when Obama issued executive orders. Who knew.

August 9, 2020
Some Sad News from Our Colleague Ed Brayton
Next Post 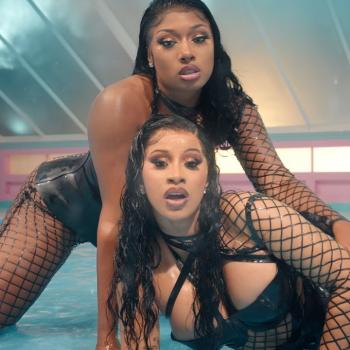 August 9, 2020 Conservatives Want to "Cancel" Cardi B and Megan Thee Stallion's Song "WAP"
Browse Our Archives
What Are Your Thoughts?leave a comment