During an interview yesterday on FOX Business Channel, MAGA cultist and Trump sycophant Pastor Robert Jeffress said a lot of wild stuff, but there was one particular leap of logic that made no sense even for him.

It is no coincidence… that 70% of atheists identify as Democrats and only 15% as Republicans. The Democrat Party has become a godless party.

It’s true that about 70% of atheists are Democrats and 15% are Republicans. That’s according to the Pew Research Center’s 2014 Religious Landscape Study. (Considering how much has changed since then, I would strongly suspect that 70% number is quite a bit higher now.)

That same study, however, also found that 84% of Democrats believe in God in some capacity. (76% are absolutely or fairly certain God exists!)

It’s not a “godless party” by any stretch of the imagination.

(If you need help making sense of Jeffress’ innumeracy, even if 100% of atheists were Democrats, the party as a whole would still be more than 70% religious.)

Just because atheists lean liberal doesn’t mean the Democratic Party is overrun by atheists. But most of us recognize that the GOP only cares about the demands of white evangelicals. Whatever problems we have with Democrats, Republicans are significantly worse on the issues we typically care about.

Jeffress knows that. But telling the truth goes against his faith. It would upset his Lord and Savior Donald Trump. 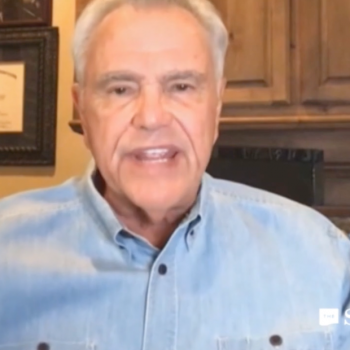