Anti-LGBTQ activist Scott Lively — the man who inspired Uganda’s infamous “Kill the Gays” bill — was last heard claiming that Democrats will burn down cities to avoid paying out police pensions.

Now he’s blaming gay people for Marxism and insisting that demons are controlling the country:

Lively blamed an array of problems on LGBTQ people, who he said “have been the point of the spear in the United States of cultural Marxism all the way going all the way back to the 1940s.”

In the July 26 episode of his “Breaking News Bible Study” radio show, Lively argued that churches should be completely exempt from public health restrictions, because he said the church is “a separate sovereign.”

Churches don’t have the right to injure the public just because it may be one of their beliefs; they also shouldn’t be able to spread COVID just because they want to meet in person. The fact that they’ve been identified as “hot spots” for spreading the virus only makes that more clear. Considering the 160,000 people who have died from the virus so far include plenty of devout Christians, that’s even more ridiculous a claim, though it’s possible Lively would write them off as false believers or something.

Trump, by standing against the Marxist agenda and not backing down, not capitulating, every single wave that they have engaged in to try to take him down has exposed a greater and greater number of the demonic forces that are in control of our country.

If Trump is fighting demonic forces, then I must be a Satanist. That rhetorical flourish is nothing more than a convenient way to write off a movement or ideology without having to make the effort to understand it. Protecting basic freedoms and fighting for civil rights isn’t evil. To suggest otherwise is an indication of how extreme Lively is.

August 7, 2020
Jerry Falwell, Jr. is Taking an "Indefinite Leave of Absence" from Liberty U.
Next Post 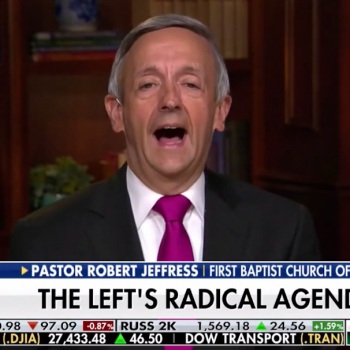