Jerry Falwell, Jr. is Taking an “Indefinite Leave of Absence” from Liberty U. August 7, 2020 Hemant Mehta

Jerry Falwell, Jr. is Taking an “Indefinite Leave of Absence” from Liberty U.

So now we know what it takes for Jerry Falwell, Jr. to step away from Liberty University…

The school issued a one-sentence statement tonight saying Falwell would take an “indefinite leave of absence.”

The Executive Committee of Liberty University’s Board of Trustees, acting on behalf of the full Board, met today and requested that Jerry Falwell, Jr. take an indefinite leave of absence from his roles as President and Chancellor of Liberty University, to which he has agreed, effective immediately.

Here’s what I want to know: Why now?

Earlier this week, Falwell made headlines for posting, then deleting, a picture on Instagram in which his arm was around a woman who wasn’t his wife, with their bellies hanging out, with their flies down, and Falwell holding a glass of what he called “black water”:

He was apparently taking part in some Trailer Park Boys theme party. But more to the point: If a student at Liberty was found taking a suggestive picture like that, or even holding alcohol, or even attending a party where alcohol was present, it could be grounds for expulsion. The hypocrisy was unbelievable.

The bad press no doubt played into today’s decision. It didn’t help that a GOP lawmaker, Rep. Mark Walker of North Carolina, who once taught at Liberty, called for Falwell to step down yesterday.

As a Music Faculty Advisory Board Member and former instructor @LibertyU, I’m convinced Falwell should step down.

None of us are perfect, but students, faculty, alumni and @LUPraise deserve better.

(Walker isn’t one to talk. You can’t belong to a political party whose leader is Donald Trump, then say someone else’s behavior is “appalling.”)

It’s telling, however, that this is the scandal that broke the camel’s back from Liberty’s board of trustees.

Seriously, of all the reasons for Falwell to step down, that picture was the least of anyone’s concerns.

But I’ll go ahead and make this prediction: Falwell is doing this because it’s the easiest way to survive the scandal.

Consider how this is the ideal year for him to step away from Liberty U. for the same reason it’s a good time for high school graduates to take a “gap year.” The school year is already in chaos. If you need to take a break, now’s the time to do it.

A year from now, I fully expect Falwell will return after saying he took some needed time off, spent a lot of time reading the Bible, got reacquainted with God, and turned a new leaf in his personal life.

The students will then go back to calling him “Jerry” on campus. The board of trustees will welcome him back with open arms — before they all go back to their donors to ask for cash. And nothing will truly change. 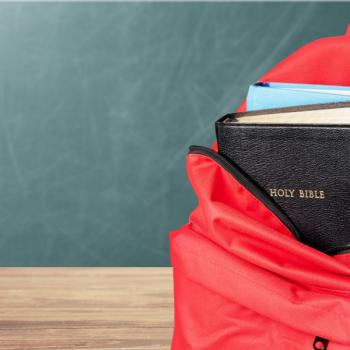 August 7, 2020
Atheist Groups Urge Congress Not to Use COVID Cash to Boost Religious Schools
Next Post

August 7, 2020 Scott Lively: Gay People Have Led the Way for "Cultural Marxism"
Browse Our Archives
What Are Your Thoughts?leave a comment