Last night, Sarah Ray, the co-founder and director of the Atheist Community of Polk County (in Florida), deliver an invocation in front of the Lake Wales City Commission.

I mentioned earlier that her presence at the meeting was already creating a stir. Two elected officials had already said they would protest her invocation. Al Goldstein said he would leave the room but put his Bible on the dais. Curtis Gibson said he would turn his back on Ray because “I don’t just let anyone pray over me.”

Well, during her invocation, Goldstein and Gibson did leave the room and Ray told me you could see a Bible left behind on the dais.

I know it’s hard to make out what’s actually happening in the video — the quality is just awful — but you can definitely see the commissioners walking out as Ray steps up to the podium. They’re in the second box in the top left of the screen.

Here’s text of her prepared remarks:

Thank you Mayor, Commissioners and City Staff for your service to the community, and for the opportunity to provide reflection and an inspirational start to your meeting. I stand before you tonight by request of citizens of Lake Wales who are also members of the Atheist Community of Polk County. I am honored to represent them and all your atheist, agnostic, humanist, and other non-religious constituents.

We find ourselves once again in a period of uncertainty and discord, and it is during these times especially, that we look to our leaders for guidance, for reassurance, for hope. Consider the vast collective knowledge and leadership that comes together in this all-important task of self-governance: of, by, and for the people.

The brilliance in the design of self-governance to me is profound yet simple. We, the people, far more alike than different, bring our many unique talents and skills together for the good of all.

Tonight I call for peace and understanding. Yes, I’m an atheist. I’m white. I’m a parent. I’m originally from Illinois. I’m a transgender woman. We are all different in many ways. If we have prejudged each other already upon these differences, I fear we have lost before we ever began. Instead, may we seek out that which we have in common, and recognize that much of what makes us different separately, makes us stronger together. This is the foundation upon which we can build a better tomorrow – TOGETHER.

So, let us all meet there tonight, together, at that foundation of our shared humanness and approach these important responsibilities with reason and compassion as we work to build that better future for all the citizens of Lake Wales.

In service, I thank you.

I have a hard time finding anything in that speech that’s so objectionable that two elected officials thought they needed to walk out before they were tainted with her calls for unity and wisdom. My problem isn’t that they protested, which they have every right to do. It’s the reason for their protest. If elected officials ever “protested” a Christian invocation the same way, I would bet some right-wing website would see it as evidence of Christian persecution.

That said, Ray told me last night that after the meeting, she and her colleagues had a brief (pleasant!) conversation with Goldstein in which they told him all this drama could be avoided if they just got rid of the invocation (and let people pray on their own time). I don’t know if he’ll consider that option seriously, but none of it negates how his behavior only ever seems to happen in one direction. 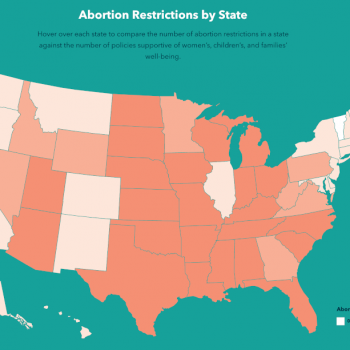