Robert Jeffress: Evangelical Biden Voters Have “Sold Their Soul to the Devil”

During an interview yesterday with Lou Dobbs on FOX Business Channel, MAGA cultist and Trump sycophant Pastor Robert Jeffress claimed that the only evangelicals who would vote for Joe Biden this November are the ones who have “sold their souls to the Devil.”

Which is one hell of a way to characterize the 88% of Black Protestants (and 17% of white evangelicals!) who said they intend to support Biden.

There’s not a snowball’s chance in Hell’s chance [sic] of Joe Biden gaining any significant evangelical vote at all. And the reason is this: The only evangelicals who are going to vote for Joe Biden are those who have sold their soul to the Devil and accepted the Democrats’ barbaric position on abortion…

That “barbaric” position, by the way, is that women should control their own bodies instead of Republican lawmakers.

Jeffress also responded to the Freedom From Religion Foundation’s request to the IRS that his church have its tax-exempt status revoked after Jeffress promoted a possible Mike Pence presidency in 2024 with the vice president sitting in his audience. FFRF noted that non-profits are not allowed to endorse candidates; Christian churches shouldn’t be given a free pass on the rules.

To that, Jeffress lied about FFRF’s position in order to make himself look persecuted:

… and I said, “There are millions of Christians who are hoping, Mr. Vice President, that when you have finished your term in 2024, that you move down the hall and continue to build on the legacy of the greatest and most faith-friendly president in history, Donald J. Trump.

And, Lou, if that lands me in prison, if that revokes our tax-exempt status, so be it. But obviously, it’s not going to.

FFRF never said Jeffress should be in prison. He’s just saying that because he’s a Christian liar.

FFRF also doesn’t care if pastors speak out on politics (like discussing abortion or marriage equality). He’s just saying that because he’s a Christian liar.

What non-profits (including churches) can’t do is endorse candidates. Which is precisely what Jeffress did, even if it was a hypothetical future election.

Naturally, Lou Dobbs didn’t challenge him on any of this. Because Dobbs isn’t a journalist. He’s just a mouthpiece for the GOP. Dobbs did, however, say he would start his own organization: “The Freedom From, uh, Atheistic, uh, Organizations Who, uh, Want To, uh, Trample Those, uh, Who Don’t Have The Resources To Stand Up To Them In Law.” (Not exactly a mic drop moment.) 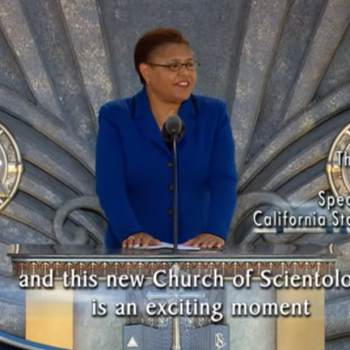