Rep. Karen Bass Praised the Church of Scientology in 2010. It’s Not a Big Deal.

Just so you all know, I proudly worship at First New Christian Fellowship Baptist Church in South LA. pic.twitter.com/1sEpF5KpRF

The right-wing website Daily Caller posted video yesterday of Rep. Karen Bass — reportedly on Joe Biden‘s shortlist to be his running mate — praising the Church of Scientology when it opened an “Ideal Org” center in Los Angeles in 2010. At the time, she had just finished serving in the California State Assembly.

In that video, Bass says of the Church, “I know your goal and your commitment is truly to make a difference.” She also praised founder L. Ron Hubbard for the Church’s “creed” saying “that all people of whatever race, color or creed, are created with equal rights.” Scientology’s president, David Miscavige, whose own troubling history has been the source of much reporting, was also on stage.

If you’re cynical like me, then you know this is nothing more than a conservative media outlet’s attempt to discredit a potential VP selection. But it’s also not doctored footage or anything. So… fair game.

The best case scenario here is that Bass was asked to speak at the opening of a religious venue in her community — one whose members include some rich and powerful people who may well become donors — and she knew next to nothing about Scientology. So she praised them for their public statements and alleged mission, fully ignorant of the deep, dark, disturbing, and dangerous nature of the cult.

It’s not like she would’ve been alone. There were other politicians on stage that day and the New Yorker‘s Lawrence Wright didn’t expose the Church until 2011, nearly a year after this event. That’s not to say the disturbing aspects of Scientology were a secret or anything, but someone who wasn’t paying attention might not have been familiar with the more frightening stories.

Based on her remarks, which are superficial at best, that seems to be the case here. She just didn’t know what she was getting into. She gave positive remarks at a ribbon-cutting ceremony. She offered lip service to a group she knew very little about. That’s not weird. (I’ve seen politicians give remarks at a Jain Temple; it’s always obvious their knowledge of the religion consists of whatever’s in the first couple of sentences on Wikipedia and nothing more. But hey, it’s an easy way to pander.)

In 2012, Bass commended the Church for its work on “human rights” — laughable to those familiar with Scientology — but so did then-Sen. Harry Reid. She did the same in 2013, but again, so did several politicians.

All of this suggests she just didn’t know much about the Church.

The flip-side of that is… how do you not know about Scientology? It’s not like it wasn’t messed up before 2010. They oppose psychiatry and psychiatric drugs. They brainwash people. Has anyone seen Shelly Miscavige lately? But it’s easy for people familiar with Scientology to say that; remember that most people don’t have the Church on their radar at all.

Tony Ortega, a journalist who has covered the Church for decades, summed up the Bass controversy rather bluntly: “It’s not a good look.” But that’s about the worst of it. Ortega offered some advice too, adding that “a word about how she has nothing to do with Scientology today, and that she is concerned by the revelations brought out by people like Leah Remini would go a long way.” I completely agree.

If this was meant to discredit Bass, it’s a cheap attempt at doing so. This video doesn’t suggest Bass supports Scientology, or even that she would do the same event today, knowing what we know now about the Church. All it says to me is that she was willing to show up in front of an audience — any audience — for what seemed to be a media-friendly event. (Good luck finding politicians who won’t do that.)

It’s tempting to give a knee-jerk reaction and say this is disqualifying when it comes to being Biden’s running mate. But if this is the worst thing her critics can find, it merely reveals a blind spot in her knowledge, not that she’s incapable of changing her actions when provided with new evidence. It’s a misstep. It’s a distraction. Nothing more. (If Scientologists were a larger portion of Donald Trump’s base, no doubt he’d be doing these events right now.)

So roll your eyes at it all you want. Let’s hope Bass has learned more about Scientology over the past few years — she hasn’t said anything publicly about this video since the Daily Caller’s article was published. But let’s not pretend there’s anything nefarious happening here. 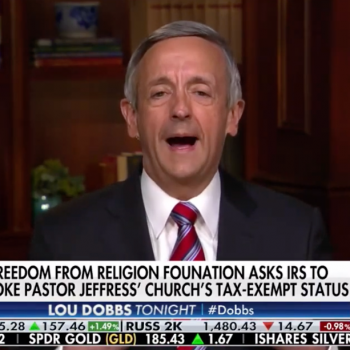 August 1, 2020 Robert Jeffress: Evangelical Biden Voters Have "Sold Their Soul to the Devil"
Browse Our Archives
What Are Your Thoughts?leave a comment