Robert M. Price has long been a politically conservative writer known in secular circles for rejecting the existence of a historical Jesus (i.e. “mythicism”) and writing books such as The Case Against ‘The Case for Christ’.

In 2016, we published an interview with him in which he spoke about why he supported Donald Trump for president. (One reason: “Hillary Clinton is a pathological liar and a felon.”) And in 2017, he joined the board of directors for the group Republican Atheists. He has also published dozens of articles for Free Inquiry, a publication of the Center for Inquiry, as recently as last year. He also, for a couple of years, hosted their podcast Point of Inquiry.

He’s not just an atheist, in other words. He’s an atheist who has left footprints in the secular community and continues to be a presence in it today.

Price is now in the news for a very different reason, this time in the world of fantasy fiction. (Wikipedia calls him a “major figure in H. P. Lovecraft scholarship.”)

He was about to resurrect (ha) an anthology series called Flashing Swords!, which was popular in the late 1970s. But when the new collection of short stories became available on Amazon this week, Price’s Jesus-Christ-what-the-hell-is-wrong-with-you introduction to the series was also visible through the “Look inside” option. And it came as news to the authors whose stories were in the collection. 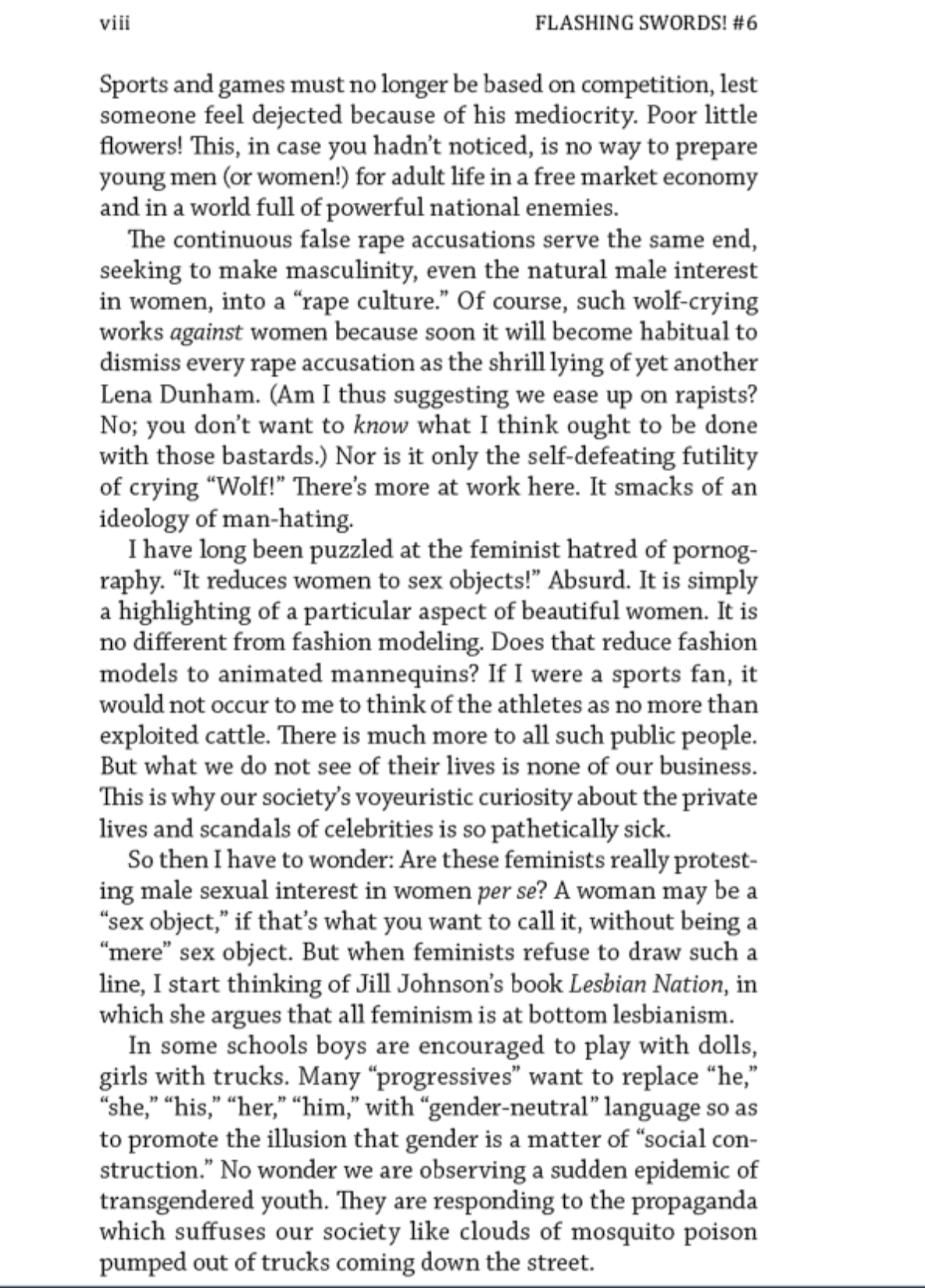 On a single (visible) page, we have a reference to “continuous false rape accusations,” “man-hating” feminists, the suggestion that feminists hate pornography (as opposed to being critical of certain problematic aspects of it), and fear-mongering about the “sudden epidemic of transgendered youth.”

In the past 24 hours, a number of contributors to that anthology have called for their work to be removed from that collection.

… I have requested that my name and story be removed from the anthology, and I cannot recommend that anyone buy the book.

… None of us who contributed to the book saw the introduction prior to publication. This introduction does not reflect my beliefs, my feelings, or my philosophy of tolerance, understanding, and acceptance…

… A short time ago I learned of Robert Price’s introduction and felt sick to my stomach. I wrote and requested my name and story be removed from the book as well as the book that followed…

Whether I agree or disagree, I do not believe in political screeds prefacing my story. If I want politics in my story, I will put them there myself. I did not sign up for a crusade. I signed up to tell a fun story with other stories of sword-&-sorcery.

A request to remove the introduction was refused. I have requested that my name and story be removed from the anthology. At this time, it is not clear this will be done. It is certainly not worth going to court over.

Personally, obviously, I cannot recommend the anthology in its current state.

The book has apparently been delisted by the publisher, though it’s still currently on Amazon.

July 31, 2020
High Court: England and Wales Must Recognize Humanist Weddings... But Not Yet
Next Post