If you’re driving through Atlanta this week, be on the lookout for two digital billboards from the group Black Nonbelievers urging other Black people to “liberate” themselves from Christianity, a faith the group says is responsible for “aiding and abetting White supremacy.”

“Christianity was definitely a useful tool for enslavers,” says Black Nonbelievers Founder and President, Mandisa Thomas. “It conditioned us to accept harsh treatment and oppression and even gave us a way to view that acceptance as godly behavior. We were trained to ‘serve our earthly masters’ as a proxy of how earnestly we would serve our ‘heavenly master’ — all while we waited for justice and our reward in the next life.”

“One major concern to many of us is how much the Black community still tightly holds on to Christianity in particular,” says Thomas. “While the general nonreligious demographic is on the rise in the U.S., the numbers in our communities are significantly lower in comparison. And as anti-racism work becomes a focal point, it is clear that something as foundational as faith could be predisposing us to more oppression, and for longer periods of time.

“We understand that this is a tough ask. It may be difficult to accept the complicity. But given the history of Christianity — especially as it relates to Black community — we must address it. We are ready.“

It’s an argument many atheists have made in the past — not always eloquently — but it obviously carries more resonance when it’s coming directly from the Black community.

Thomas is right to point out that the rise of the “Nones” across the country hasn’t occurred among younger Black people. A 2018 Pew Research Center analysis found that 75% of Black Millennials were “absolutely certain God exists,” compared to 48% of non-Black Millennials.

The signs, “displayed near I-75/85 at Langford Parkway, and Peachtree Road, near Piedmont Hospital” with help from the Stiefel Freethought Foundation, will be up for four weeks. They follow two longer discussions about the topic that were live-streamed on YouTube a couple of weeks ago. If you visit AskBN.org, as the billboards say, you’ll find those videos as well.

July 27, 2020
Ralph Reed: We Must Re-Elect Trump to Ensure Christian Supremacy in Politics
Next Post 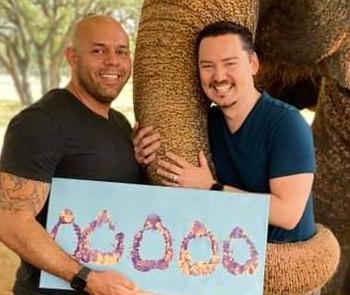