During Friday night’s baseball game — their first of the shortened season — San Francisco Giants relief pitcher Sam Coonrod refused to take a knee with the rest of his teammates in honor of Black lives and the fight against racial injustice. The preplanned act of symbolism took place just before the National Anthem. 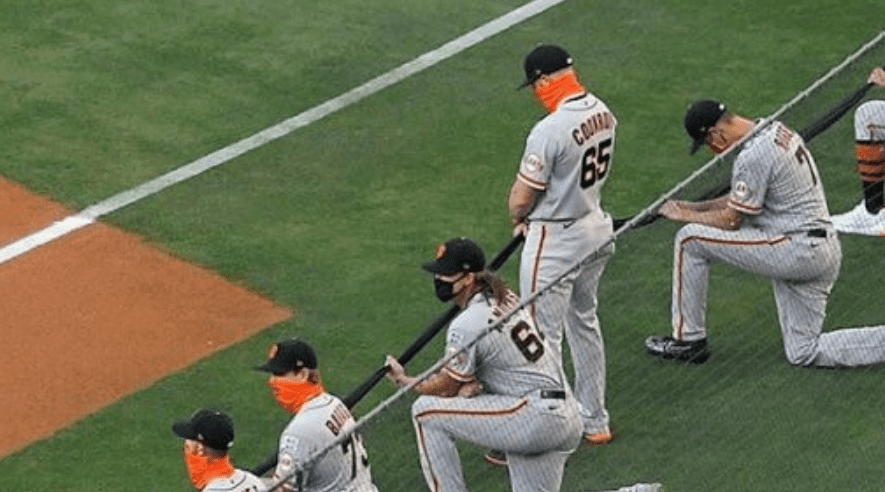 Coonrod later said that as a Christian, he didn’t want to kneel for anything other than God… which might have made some sense if he didn’t go on to spread right-wing propaganda about what Black Lives Matter represents.

“I’m a Christian,” Coonrod said. “I can’t get on board on a couple of things I’ve read about Black Lives Matter, how they lean toward Marxism and said some negative things about the nuclear family.”

He was referring to comments made five years ago by a Black Lives Matter co-founder, acknowledging she was a Marxist, cited repeatedly now by some conservative commentators.

“I meant no ill will by it,” Coonrod said. “I don’t think I’m better than anybody. I’m just a Christian. I believe I can’t kneel before anything but God, Jesus Christ. I chose not to kneel. I feel if I did kneel I’d be a hypocrite. I don’t want to be a hypocrite.”

He’s just a Christian, but most everyone else who was kneeling is… what, exactly?

Most of those players are undoubtedly Christian too. Somehow, they understood the difference between using their platform to draw attention to racism and injustice through the act of kneeling and staying true to their personal beliefs.

Had Coonrod kneeled, who exactly would have called him out as a religious hypocrite? It’s a bogeyman that exists only in his mind.

But he decided the simple gesture was actually an act of Christian Persecution, as if Major League Baseball wanted him to violate his religious freedom. The selfishness right there is unbelievable. Christians who have similar mindsets routinely want everyone pledging allegiance to the U.S. flag… but kneeling for Black lives is somehow crossing the line?

The controversy is less about his not-kneeling and more about Coonrod’s bizarre misunderstanding about what BLM represents, as if one person stands for the entire movement, or as if everyone who’s been protesting these past several weeks gives a damn about every word written on the Black Lives Matter website.

To not even understand what his colleagues are doing, and then to cite his faith as a shield against criticism, just reveals how little he knows about the moment we’re in as a nation.

Here’s just one example of a Christian player who was able to make sense of what Coonrod couldn’t understand:

Asked for his opinion on the #stlcards wearing Black Lives Matter t-shirts and taking unified action, Adam Wainwright spoke for more than three minutes. This will be written about extensively, but I wanted to make sure to share his words in total. pic.twitter.com/D9vfP3W7Gl

Coonrod shouldn’t be penalized for not kneeling. His manager already said there was no issue in the clubhouse. But no one should pretend this has anything to do with faith when plenty of other players who share his religion knew better.

This wasn’t some Colin Kaepernick act-of-courage moment. This was ignorance masquerading as faith. He’s lucky there weren’t fans in the stands able to react to it in real time.