Conservatives Lash Out After Biden Says Kids Should Learn About Islam in School July 24, 2020 Beth Stoneburner

There are plenty of legitimate reasons for people (on the right and the left) to dislike Democratic presidential candidate Joe Biden. He’s not progressive enough for many Democrats. He’s too progressive for Republicans (though they would say the same of Sen. Mitt Romney at this point, so take that as you will).

But the fact that Biden supports children learning about Islam in public schools should be the least of anyone’s worries. He said as much during a speech to the (virtual) Million Muslim Vote Summit earlier this week:

Look, one of the things I think is important… I wish we taught more in our schools about the Islamic faith. I wish we talked about all the great confessional faiths. It’s one of the great confessional faiths. And what people don’t realize is — one of my avocations is theology — don’t realize is that we all come from the same root here in terms of our fundamental, basic beliefs.

While atheists may feel differently about praising any religion, including Islam, the idea that students should have a basic understanding of the world’s major religions isn’t a bad idea, especially given the level of religious ignorance in this country. That’s a far cry from indoctrination into any one faith.

But CBN News writer Deborah Bunting suggests there’s something sinister about that idea, even citing a right-wing news outlet that claims the goal of Islam (all of it, apparently, for all believers) is to take over the country. Reading her, you’d think Biden just announced he’s the anti-Christ:

… not everyone agrees that Islam should be lumped into the same so-called confessional-type faiths as Christianity and Judaism. One major concern is Islam’s historic effort to dominate to the exclusion of all other religions. In a piece about the push to get Muslims elected to public office, published last week by Robert Spencer, he quotes the co-founder of the Council on American-Islamic Relations (CAIR), Omar Ahmad, as saying: “Islam isn’t in America to be equal to any other faith, but to become dominant. The Koran, the Muslim book of scripture, should be the highest authority in America, and Islam the only accepted religion on Earth.”

In any case, that statement from Ahmad was allegedly made more than 20 years ago, can pretty much only be found on right-wing websites, may have been misquoted (according to Ahmad), and never includes any context. To pretend that out-of-context line represents what a civil rights organization like CAIR really wants is to ignore everything they actually do… which is nothing like that.

More to the point: None of that has anything to do with Biden.

Bunting, citing the conservative American Center for Law and Justice, also claims that Christian students are forbidden from bringing Bibles to school (a lie) or praying (another lie). Good luck finding sources for those claims because there aren’t any. Christian students can read the Bible during downtime (my public school library even had several copies on the shelves), and they can always pray before a test or lunch if they choose to.

All the more reason to educate students about the basics of the major world religions — and atheism. There’s a lot of distortion and misinformation out there. Anything we can do to combat that would be helpful. Apparently it’s not just students who need this either. It’s clear some reporters can’t even tell the difference between members of ISIS and typical American Muslims, which makes as much sense as assuming most Christians are in lockstep with the Westboro Baptist Church.

July 24, 2020
Christian Group May Kick Rep. Ted Yoho Off Its Board for Un-Jesus-Like Behavior
Next Post 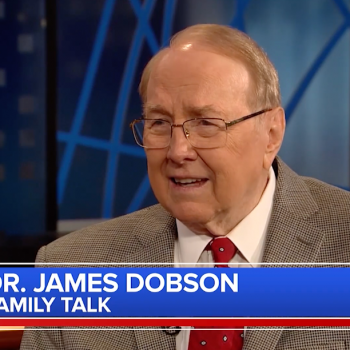 July 24, 2020 James Dobson's Family Institute Provides a Case Study in Faith-Based PPP Abuse
Browse Our Archives
What Are Your Thoughts?leave a comment