End Times preacher Carl Gallups appeared on televangelist Jim Bakker‘s show last week to argue that Satan has made it impossible to say “All Lives Matter” these days even though that’s totally what Jesus said.

“When we started saying that on the internet, oh my gosh, pastors lost their jobs, religious leaders lost their jobs, denominational leaders lost their jobs,” he continued. “Well, what is that? That’s the spirit of Antichrist. … If I can’t say, ‘all lives matter,’ that’s the word of God from Genesis to Revelation. That’s the whole purpose of the word of God is to declare in God’s eyes, all lives matter. He’s sacrificing his own son for us. That’s the heart of the Gospel. It’s the heart of the New Testament. It’s the last words of the book of Revelation. Yet the evil one has convinced the whole world that we cannot say that.”

It takes a lot of willful ignorance to say something that stupid.

Obviously, the reason the phrase “All Lives Matter” has — and should have — a negative connotation is because it’s almost always used as a knee-jerk rebuttal to the phrase “Black Lives Matter.” Saying it downplays the seriousness of racism and the anti-racism movement. It wrongly insinuates that the people marching against racism don’t give a damn about other people. It changes a message meant to raise awareness of a very real problem into something it’s not.

To turn a movement against racism into an example of Christian Persecution is just proof that people like Gallups think the world must always revolve around them.

Here’s an idea. Just say “Jesus cares for all lives.” It’s not like the three-word phrase means anything to Gallups. If the people who supposedly lost their jobs — citation needed, by the way — were only talking about Jesus, they could’ve been more thoughtful in expressing that. It’s not like Jesus said “All lives matter.” You would think people whose job is communication could find a way to share Jesus’ message without coopting a phrase used by racists and other ignorant people.

Don’t blame Satan. Blame the pastors for being too lazy. 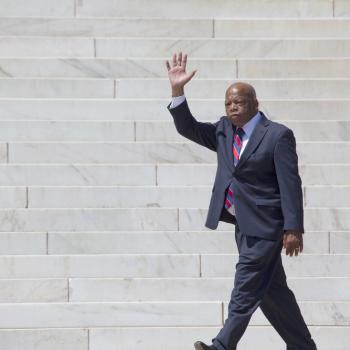 July 22, 2020
Some Christians Won't Honor Rep. John Lewis' Legacy Because He Was Pro-Choice
Next Post

July 22, 2020 Trans Pastor Junia Joplin Fired From Baptist Church for "Theological Reasons"
Browse Our Archives
What Are Your Thoughts?leave a comment