In an ongoing saga involving a Christian flag outside Boston’s City Hall Plaza, a coalition of pro-church/state separation groups have filed an amicus brief as the case heads to an appellate court.

Some background: Harold Shurtleff is the director and co-founder of Camp Constitution, a non-profit group that promotes the idea that we live in a “Christian nation.” (He’s wrong.) In 2017, Shurtleff applied for a permit to raise a Christian flag on a pole outside City Hall Plaza to commemorate “Constitution Day and Citizenship Day”… but the city of Boston rejected the request.

Shurtleff contended this was religious discrimination. Even if atheists flags weren’t allowed either, there were plenty of other flags with religious symbols allowed to go up, including the national flag for Portugal — which includes a religious symbol — during the city’s Portuguese-American festival. The city even acknowledged that significance on its website at the time. Plus, the city flag for Boston includes a Latin phrase that translates to “God be with us as he was with our fathers.”

He didn’t get very far with that one. That year, U.S. District Court Judge Denise J. Casper denied him a preliminary injunction. And earlier this year, she officially rejected his challenge. In short, she said that Boston had every right to reject his Christian flag.

Wasn’t that hypocrisy given the other flags with religious symbols that were allowed to go up? Not at all, the judge said.

Simply put, unless the city was allowing other religious or atheist groups to put up their own flags in promotion of their beliefs, Christians didn’t have a special right to do the same. And the city had good reason to say no to faith-based flags altogether.

Shurtleff then filed an appeal which will be heard soon.

On Friday, a coalition of 18 groups, including Americans United for Separation of Church and State and the American Humanist Association, urged the Court to uphold the earlier decision in an amicus brief. Their plea rests on two basic arguments: The original decision was consistent with our understanding of the Establishment Clause, and Boston’s current policy denying religious flags is good for religious freedom:

In a statement, the American Humanist Association reaffirmed why this case was so important:

“Prominently displaying the Christian flag alongside the national and state flags, on quintessential government property no less, would constitute tacit governmental endorsement of Christianity in violation of the Establishment Clause,” AHA Legal Director and Senior Counsel Monica Miller proclaimed.

There’s just no reason to overturn the earlier decision. This isn’t a complicated case. It doesn’t involve the kinds of loopholes exploited by the Supreme Court in recent church/state cases. It’s just an example of a Christian who beliefs his faith puts him above the law.

There’s no persecution going on. A Muslim or atheist group attempted to do what he’s doing would also fail. The difference is that they know better than to try it. This guy’s just whining over nothing.

July 20, 2020
S. Carolina Will Give Up to $32 Million in Grants to Private Christian Schools
Next Post 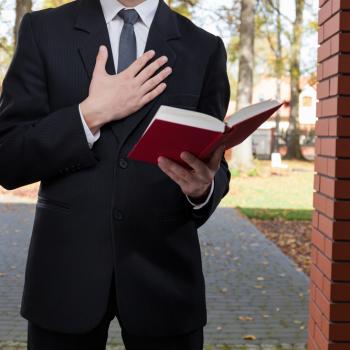 July 20, 2020 Jehovah’s Witnesses Win Big in Settlement Involving Their Propaganda Films
Browse Our Archives
What Are Your Thoughts?leave a comment