Christian evangelist and hate-preacher Joshua Feuerstein was temporarily banned from Facebook but made his unceremonious return this week, cranking out a fresh dose of insanity to his 2.6 million followers.

Take, for instance, this video condemning face mask mandates as something only “sheep” would follow.

He added in a separate post that masks were “a lie,” that COVID death rates were “inflated”, and that lockdown orders from state and local governments were just a way to stop him from “worshipping in church.”

This isn’t a different opinion. I disagree with other pastors all the time and it’s not an issue. This is rhetoric that will harm people because Feuerstein has never met a conspiracy too outlandish to adopt and spread.

It’s not even one guy with a small base; Feuerstein’s posts are often the most widely spread ones on all of Facebook… even when he’s flat-out lying. Like a few weeks ago when he claimed Black Lives Matter protesters vandalized the Vietnam War Memorial. (They didn’t.)

The #3 overall post on US Facebook today, with almost 200,000 shares, is a photo of a Vietnam War memorial vandalized by BLM protesters.

Except the photo is from 2016, the vandals weren't BLM-affiliated, and it was debunked by a fact-checker weeks ago. https://t.co/HuXbnomrLM pic.twitter.com/VR2kHqyBBc

On Monday, Feuerstein claimed a white woman had been murdered by BLM protesters — adding that the movement itself wasn’t peaceful — when the incident was completely separate from the protests themselves.

Facebook shouldn’t be giving him a platform to sow seeds of hate under the guise of Christianity. He’s a hate-monger who will always pretend to be a victim while putting others in harm’s way. 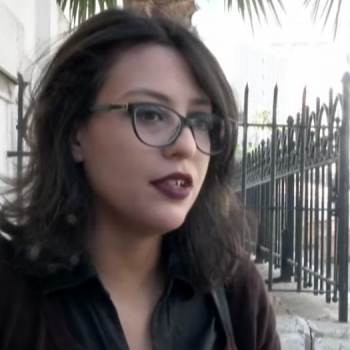 July 15, 2020 Leader of Atheist Alliance International Doubles Down on Use of Offensive Slur
Browse Our Archives
What Are Your Thoughts?leave a comment