Lively: 1920s Voters Would’ve Opposed Women’s Suffrage If They Could See Us Now

In a better world, there would be little more to report than the typical right-wing trash heap of “plandemic” misinformation that passes for commentary lately, but tragically, Lively had some hot takes on women’s suffrage, and we had to suffer through them.

Perhaps the most shocking is his assertion that, if the people who ultimately supported suffrage knew what society would look like one century later, they would have soundly rejected the whole silly idea.

Despite assurances that of course they weren’t suggesting we should take the franchise away from today’s women, Lively and his co-host Richard May couldn’t resist “just asking questions”:

“I’m not talking about taking away women’s right to vote,” Lively quickly added. “I’m just saying let me ask a question here: Would the voters of 1920 — of course, these were all men — and would the women who were urging their husbands to vote have voted for the 19th Amendment if they knew that the highest achievement of women’s right to vote in the minds of women in 2020 would be the slaughtering of unborn babies?”

“Let me ask you this question,” Richard May, Lively’s co-host, replied. “Would the women of the church of the 1920s be so inclined to pastor and lead churches if they knew that it would lead to rampant homosexuality and the approval of transgender pastors?”

Their leading questions certainly lean hard on some major assumptions. (Who says abortion is the highest achievement of women’s suffrage? How exactly does female church leadership cause rampant homosexuality?)

But by phrasing the whole thing as a question, the pair manages to weasel their way around those assumptions while sidestepping responsibility for the sexist implication that society is a mess because women are allowed to vote.

Sadly, Lively undermined even that minimal effort with further comments on the necessity of “male authority” for the health of civilization:

“Nobody talks about this,” Lively added. “It’s verboten because of the political correctness and because so many Christian women don’t even understand this concept today. Feminism has crept into the church to such an extreme that you can’t have this kind of conversation anymore without being attacked by Christian women.”

Fancy that. Those silly ladies, getting all huffy and offended every time somebody wants to blame them for the destruction of civilization.

In case the viewing audience might have any lingering doubt about the duo’s misogyny, May followed up by comparing modern female church leadership to the biblical Jezebel.

May and Lively might not intend to take women’s voting rights away, but they’re happy to imply that said rights never should have been granted in the first place. Kyle Mantyla at Right Wing Watch emphasized Lively’s intellectually dishonest claim that the push for women’s suffrage was a Communist plot:

“This is going to be very controversial,” Lively said, “but the women’s right to vote — the 19th Amendment — was actually a product of the Soviet Bolshevik revolution that was transported here to the United States in the 1920s.”

The text is accompanied by an image of a Wikipedia article that describes the First Red Scare of 1917 as a product of anxiety about a Bolshevik revolution causing changes in the structure of American life. The article does not claim that such changes were ever attempted or achieved.

Presumably, Lively assumed his audience would see the article onscreen and trust (without verifying) that its content supported his voice-over. What’s a little intellectual dishonesty if it serves his purpose?

Then again, given Lively’s colorful history — including lies about the LGBTQ community, claims of anti-Christian persecution, and (of course) racism — maybe we should have known intellectual honesty was well beyond his reach. 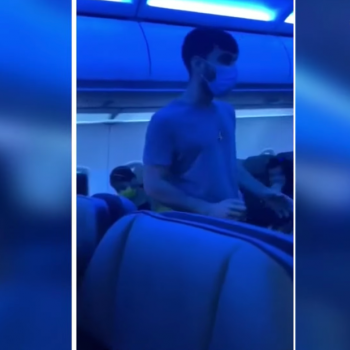 July 14, 2020
Plane Makes Emergency Landing After Man Threatens to Kill "in the Name of Jesus"
Next Post