I will never understand why anyone asks televangelist Pat Robertson for advice. I definitely don’t understand why they ask him for relationship advice.

On today’s episode of The 700 Club, a woman asked Robertson what she should do about her husband because he’s “liking photos of other women” online and complimenting their looks. He’s also “telling them things he wouldn’t dare say to a woman in front of me.”

She seemed distraught. She felt worthless. She thought he was cheating on her. What should she do, Pat?!

His response went from bad to worse.

I suggest the best thing to do is to be so loving, he cannot overcome the amount of love you’re going to give him. Just be a wonderful wife. And the fact that he’s a man and he appreciates beauty is not necessarily a bad thing. I mean, that’s the male… the way they are! They just appreciate beauty! But you be the one — you’ve got the inside track. So you be so loving that he ain’t about to leave you and go look at somebody else, okay?

He’s not cheating on you, sweetheart. He’s just admiring the female body. He’s like a Renaissance artist that way, you see?

Robertson seemed to be blaming the woman for not doing enough instead of blaming her husband for his actions. If anything, he seemed to condone what the husband was doing as a natural consequence of being a man.

At that point, his co-host Terry Meeuwsen jumped in, perhaps realizing how insane that answer was.

But do you think it’s okay if he’s telling them things online that he wouldn’t say to a woman in front of her?

Maybe he and his wife don’t share the intimacy they need. And they need to… She needs to… You make him a man. You build him up. Make them feel so good to be with you that he wouldn’t think of anybody else! That’s the way you do it. She’s got the inside track.

I remember playing football a long time ago. I missed a block and the coach jumped all over me, and I said, “Well, he got past me!” And he said, “You had the angle on him”… You’ve got the angle on him, honey. Use it. You are there every night. It’s your deal. Make it work, all right?

Nothing like blaming a wife for the misdeeds of his husband…

It’s not the first time Robertson has offered bad advice to married couples. Last year, when a man said his wife wanted a divorce and made a new female friend, Robertson insisted his wife was being “seduced by a lesbian.” In a separate incident, he told a man his wife’s lesbian friend was trying to “capture” her. When a teenager once wrote in to ask about his dad becoming distant from his mother, Robertson said perhaps “your mom isn’t as sweet as you think she is. She may be kind of hard-nosed.”

And once, when a man said his wife had become verbally abusive, Robertson responded with unnecessary bluntness: “Well, you could become a Muslim and you could beat her.”

I guess that was his attempt at “humor.”

Never ask Robertson for relationship advice. Or any advice. It won’t end well. 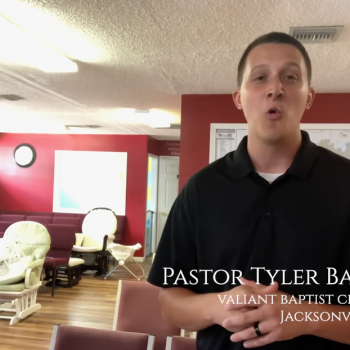 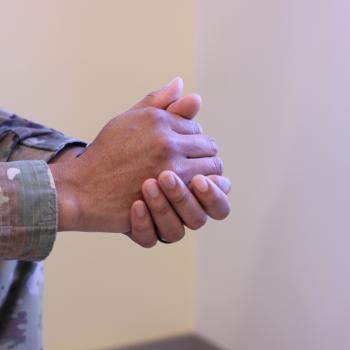 July 13, 2020 Retired Chaplain: An Officer Once Told Me "This Is a Christian Air Force"
Browse Our Archives
What Are Your Thoughts?leave a comment