On Monday afternoon, three people were arrested for causing a disturbance at a meeting of the Cape Coral City Council in Florida after they tried to sneak into City Hall “through a restricted stairway” instead of through security. Then, once they were inside, Edmee Chavannes and Bevelyn Beatty refused to put on masks because… Jesus.

Beatty spoke with NBC2 reporter Cristina Mendez and said, “The reality is the Bible tells us that we are called to go and minister the gospel throughout the earth. This is a Christian nation it’s a Christian country and our Christian values in America. That’s why our founding fathers gave us a first amendment right which god gave us first and foremost they just made to sure to put it in black and white for the constitution for freedom of speech so our job as Christians is so go and minister the gospel. The reality is this… that mask won’t protect you but Jesus will protect you”

Weird. Jesus didn’t help any of those 130,000+ people who have died from COVID so far, and I have to think at least a few of them were devout Christians.

It’s not their first time doing something like this either. They were arrested for yelling at people outside a Planned Parenthood clinic in New York City in late May. They weren’t wearing masks there, either… which is an odd way to pretend you’re “pro-life.” They also violated a state lockdown in Kentucky to attend an Easter service there.

So, in summary, these women are traveling all over the country and attending large gatherings, all without masks, putting countless people in danger, in order to convince others to believe their Christian mythology. Their faith has gone from a silly waste of their personal time to a public health threat. If they can’t make their arguments without potentially hurting other people, their arguments aren’t worth taking seriously.

Incidentally, the mask mandate in Cape Coral failed. It’s what we’ve come to expect in Florida.

(via NewsVideoClip.tv. Screenshot via NBC-2) 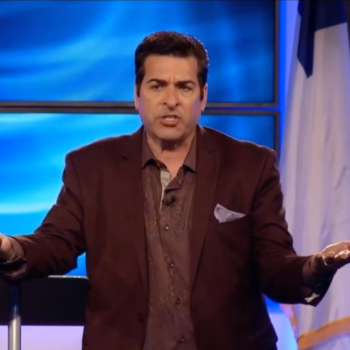 July 9, 2020
Preacher: Vote for Trump Because Jesus Doesn't Want You Voting for an Atheist
Next Post