Proving once again that Republicans currently belong to a death cult, Louisiana State Rep. Danny McCormick, who was elected last November, posted a video yesterday in which he pretended to set fire to a face mask… before pretending to use a chainsaw on another one. He also compared mask mandates, like one recently instituted by Shreveport Mayor Adrian Perkins, to the Holocaust.

The goal? Who the hell knows. Maybe he got bored and decided to make an attack ad against himself.

“Government needed a villain,” McCormick said in the video. “People who don’t wear masks will be soon painted as the enemy just as they did to Jews in Nazi Germany. Now is the time to push back before it’s too late. We can preserve America.”

“Your body is your private property,” he said in the video. “If the government has the power to force you to wear a mask they can force you to stick a needle in your arm against your will. They can put a microchip in you. They can even make you take the mark. After all, it’s for the greater good.”

Comparing a government trying to save your life with one plotting your annihilation is somehow a distinction that eludes McCormick.

He insists masks themselves are fine, but mask mandates are bad. Except, like vaccines, masks are most effective when everyone’s doing it. The masks are meant to protect other people; if half a church chooses to go mask-less, COVID particles will still spread. We need more mandates, not fewer.

As you’d expect from someone this blatantly ignorant, he’s a Christian Nationalist too.
Besides his campaign website including a separate page for those who wanted to join his prayer team, he filled out a questionnaire declaring that we were founded on “Judeo-Christian values” and that the LGBTQ “agenda” is a “threat to First Amendment freedoms of speech, expression and religious exercise.”

The irony is that this guy is so “pro-life” — in all cases, except maybe to save a mother’s life — yet his actions now are contributing to more virus-related deaths.

And of course, McCormick is a hypocrite. In the video, he denounces mask mandates because “your body is your private property.” So the government telling people to wear masks is a violation of their civil liberties… but the government forcing women to give birth against their will is just fine.

He doesn’t care. They never do. They belong to a death cult. They worship Trump. They’re selfish. They don’t give a damn about people who aren’t just like them. And Jesus is an afterthought who’s only relevant when campaigning. 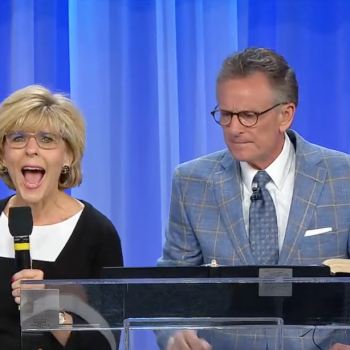 July 8, 2020 Scamvangelist's Church Tells COVID to "Cease and Desist NOW"... Again
Browse Our Archives
What Are Your Thoughts?leave a comment