Mississippi Church Ousts Pastor For Taking a Stand Against Racism

Working out of Lowndes County, Mississippi, The Heights is a church that describes its mission as “lifting Jesus and lifting people.”

They don’t specify what race those people should be. But in the wake of the racial reckoning that followed George Floyd‘s murder, they’ve made their position clear.

That’s because the church’s board has voted to sever relations with Bishop Scott Volland and his wife Debra Volland over the pair’s active support for Black Lives Matter and the cause of anti-racism.

It’s long been a cause the Vollands have held dear, and his biography on the website for The Heights mentions his service as the Bishop of Multicultural Relations for the Full Gospel Baptist Church Fellowship. In a Facebook post discussing the board’s decision, Volland says he was always upfront about his commitment to inclusion.

From day one, we have been clear and upfront about our vision and calling towards multicultural ministry and what we believe is God’s desire in building/growing The Heights into an ethnically diverse, unified congregation… Certainly, recent events in our nation, and in our county, have caused an urgency and a necessity in me to speak up and speak out regarding social injustices and inequalities, specifically those due to racism and prejudices towards the African-American community.

And therein lies the problem. It seems the board didn’t have any particular problem with broad platitudes about welcoming people from all races. But Volland actually took specific actions to upset the status quo — listening to Black Americans about their struggles and using his position to advocate for solutions.

He has loaned his voice to local movements objecting to historical symbols that glorify slavery, including Civil War monuments and the Confederate flag, which also appeared on Mississippi’s state flag before lawmakers voted Sunday to change it. Speaking days before that vote, Volland said, “Mississippi has long been on the wrong side of history. Mississippi is currently on the wrong side of history.” He has also participated in rallies and public protests, and his comments have appeared in local media.

After members of The Heights threatened to cut ties with the church over Volland’s activism, the board came together to remove him from leadership, saying his “agenda” didn’t match the church’s needs and values.

They said that what I was doing was shedding a negative light on the church. I was told my views didn’t reflect many of the views in that church. They in fact did not only disagree with me being involved but in many cases [disagreed] with what I was saying.

The vote to remove Volland was apparently contentious, remaining deadlocked until one of Volland’s supporters changed their vote to prevent further division among board members. That unnamed individual has since resigned from the board.

It appears that Volland has mixed feelings on this turn of events. While he’s emotionally invested in the lives of his parishioners and feels “deeply hurt” by what’s happened, he doesn’t want to remain in an environment where his pursuit of social justice is considered a liability:

This is just a time where our visions and ideologies were diametrically opposed and it was best for us to part ways than continue to be a frustration one to another and have bitterness that builds up. I’d sooner part ways on a somewhat friendly note than to stay and part ways as enemies.

Days after being removed from The Heights, Volland was already working towards starting over with the same racially inclusive mission. In an announcement on Facebook Live, Volland said that he and his wife are now working to launch a racially inclusive church called The Bridge. He says God had allowed him to secure a home for this new church in a former pawn shop, and he calls on viewers to “sow a seed into the destiny of this ministry that God has ordained” via CashApp.

If he’s building a new church, it’ll be worth watching how many members follow him there from The Heights.

(Thanks to @FabieJOHS for the link)

June 29, 2020
A Megachurch Let the Pastor's Son Work With Kids Despite His "Attraction to Minors"
Next Post 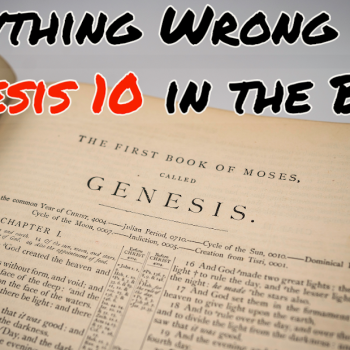