Israeli authorities issued a first-of-its-kind ruling yesterday shutting down Shelanu, a Hebrew-language offshoot of God TV that had been broadcasting since April, because the people behind it were not up front about the fact that its mission was to convert Jews.

It’s hard to see how regulators missed it given the straightforward nature of the fundraising videos that included lines like “I believe that God Himself has sustained God TV for such a time as this to see His children’s eyes open to Jesus.”

Overnight, the video message that had caused the storm was taken down and God TV issued a clarification: The network had no intention of trying to convert Jews to Christianity, [CEO Ward] Simpson said in a new video message; it merely wanted them to accept Jesus as their messiah.

Glad that cleared everything up…

Haaretz notes that proselytizing isn’t necessarily illegal in Israel, but it is against the law to try to convert children under 18 without parents’ permission. A TV channel aimed at conversion that could possibly reach children, then, could be seen as a violation of the law. The people at God TV also said their goal was to provide programming for Christians who live in Israel, not to preach beyond the choir, though that seems counter to some of the earlier public statements.

It’s possible the channel is back up and running quickly. All they have to do is work around the regulations and low-grade Christian TV will be available to viewers throughout Israel. When that happens, you can bet there will be all kinds of mindless (and ironic) discussions about how this whole incident was a case of persecution. 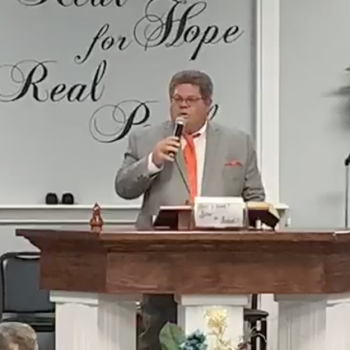 June 29, 2020 A Megachurch Let the Pastor's Son Work With Kids Despite His "Attraction to Minors"
Browse Our Archives
What Are Your Thoughts?leave a comment