Kat Kerr, the self-proclaimed Christian “Prophetess” who thinks Heaven is home to cows driving tractors and a city made entirely out of Jell-O, says that the upcoming Republican National Convention in Jacksonville, Florida will be perfectly safe because she has placed 100 million angels there to protect everyone.

"Prophetess" Kat Kerr has assigned 100 million angels to protect the Republican convention from any violence or disruptions. pic.twitter.com/It6Mq4bUEP

… We are going to train you, during the Republican National Convention, how to command strategically the army assigned to you, when to send them, and what to declare for them to do through this convention. There will be no violence involved. We don’t want any violence, any interference, not in any area of society, or in the natural… whatsoever… that will hold up, delay, or interfere with, or cause any kind of violence during the Republican National Convention. I’ve already assigned 100 million angels to start — they’ve been posted in certain areas in our city, and around our city…

Oh good. The angels will be stationed there. I was worried.

But what will Republicans do after the Prime Minister of Black Lives Matter hears about this and sends 100,000,001 angels to fight back? All hell will break loose, I tell you. 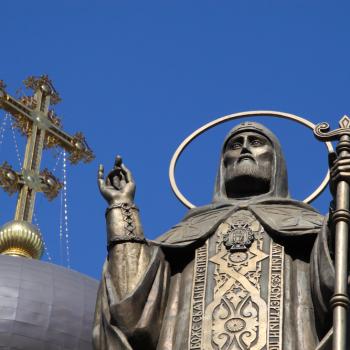 June 19, 2020
Rogue "Wahhabi" Priest, Who Thinks COVID Is Fake, Takes Over a Russian Convent
Next Post