In July of 2018, following an executive order signed by Donald Trump a year prior and a subsequent memorandum from then-Attorney General Jeff Sessions, Sessions announced the creation of the taxpayer-funded “Religious Liberty Task Force.”

The goal, based on reports at the time, was to defend the people who wanted to use their religion (read: Christianity) to discriminate against others. We’re talking about evangelical bakers who didn’t want to sell wedding cakes to same-sex customers and Catholic bishops who didn’t want gay couples adopting children from their taxpayer-funded agencies. The anti-LGBTQ conservative legal group Alliance Defending Freedom was present at the announcement, too, offering even more evidence that this was just a new way to endorse Christian bigotry at the expense of everyone else’s civil rights.

But the biggest complaint about the group was that no one knew what it officially did. Defending religious freedom is already what the Department of Justice is supposed to do… so why bother with this task force? There were hunches, obviously, but even the government wouldn’t declare the actual purpose of the group, what authority it had, who would serve on it, how often it would meet, if proceedings would be open to the public, etc.

A number of organizations, including the Human Rights Campaign, filed Freedom of Information Act (FOIA) requests to obtain records about the task force.

All of that happened in 2018. And then the task force just… disappeared. At least from the public eye. Seriously, do a search for it online and you’d be hard-pressed to find anything about it after that except for references to its formation. Part of that is surely because Sessions was forced out of his role that November.

So what the hell did the task force do over the course of a couple of months?!

BuzzFeed’s Jason Leopold just obtained the results of his own FOIA request into the matter and the result is… well, good luck finding out. Everything substantive has been redacted.

There was a meeting of the task force on October 18, 2018… but we’re not allowed to find out what was discussed. Nor do we learn the “talking points regarding religious liberty litigation.” Nor do we learn what DoJ officials said to the Mormon Church’s “government relations guys here in DC.”

It’s all a black box. Literally.

Does it mean something illegal happened? No. But rather than just classifying sensitive information like certain names and email addresses, as is common with government documents, we’re unable to learn anything useful about what this “task force” did even though taxpayers funded it. As some people on Twitter noted, nothing says “liberty” and “freedom” like documents no one’s allowed to read.

These aren’t government secrets. There are no war plans or undercover operations listed out. In theory, there’s nothing here that should be secret since protecting religious liberty is literally what our government ought to be doing under the Constitution. And yet this administration, controlled by the Christian Right, will not let anyone find out what they did.

June 18, 2020
Churches Are Receiving Bailout Dollars and the GOP is Hiding All the Details
Next Post 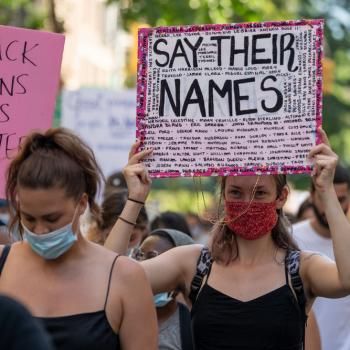 June 18, 2020 NY's COVID Rules Turned State Into a "Dictatorship," Religious Plaintiffs Charge
Browse Our Archives
What Are Your Thoughts?leave a comment