I live on the Maine coast. When I occasionally drive inland, or to counties north of the Midcoast area, it’s not uncommon to see actual Confederate flags, and to come across the flag design on anything from truck decals to baseball caps. Last night over dinner, my 18-year-old daughter commented on that startling phenomenon, and nailed it:

And so it was with the stained-glass window that a church in Boise, Idaho had installed 60 years ago. It depicts Confederate General Robert E. Lee. A hearty WTF is in order. 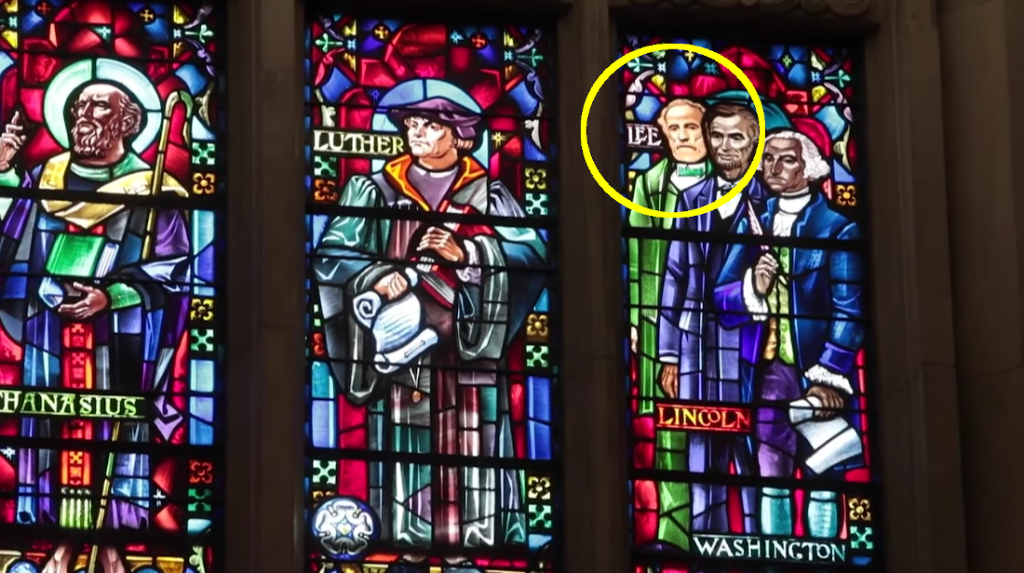 The Cathedral of the Rockies installed stained-glass windows for its then-new building in downtown Boise in 1960. Church documents show that the window, featuring Lee standing with Presidents Abraham Lincoln and George Washington, was meant as an “inclusive nod to Southerners who have settled in Boise,” said the Rev. Duane Anders, senior pastor. “Clearly, white Southerners.” …

The image of the commander of the Confederate armed forces during the Civil War has stood in the church undisturbed, and often unnoticed, for more than half a century.

Today, it’s still there, but Anders and other church leaders have adorned it with a banner that says “WE REPENT.” They erected an even larger banner with the same message outside the church. And they’ve abandoned earlier plans to install a plaque next to the window that would have

… acknowledg[ed] the harm the image had caused, as a first step toward removing the window.

After “passionate feedback from members of the community and the congregation,” the church instead decided to get rid of General Lee’s likeness entirely, and soon; and to possibly replace it with

… a person of color like Harriet Tubman or United Methodist Bishop Leontine T.C. Kelly, a Boise woman and the first Black woman elected to the denomination’s episcopacy.

The regret felt by the congregation and the church leaders seems genuine and profuse.

On Wednesday, the church’s board sent an email to parishioners. At the top in bold lettering, the message begins: “WE REPENT for our participation in white supremacy. #blacklivesmatter.”

“We believe this section of our window to be inconsistent with our current mission, to make disciples of Jesus Christ for the transformation of the world, as well as the banner which hangs above our doors espousing, ‘all means all — you are welcome here,’” the board wrote. “Further, such display is a barrier to our important work resisting evil, injustice, and oppression. Symbols of white supremacy do not belong in our sacred space.”

The hateful artwork, after it is removed from the church, will likely be placed in the collection of the Idaho Black History Museum.

P.S.: In my state, too, things are changing, and what was acceptable or ignored last month no longer is now. Here’s a cool story involving a remarkable anti-racist video that has garnered close to 4.3 million views. Small steps. 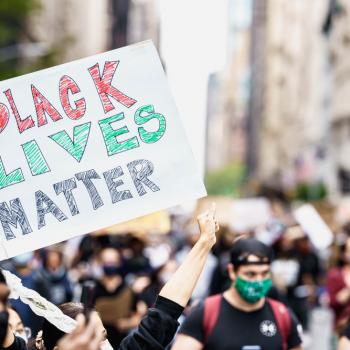 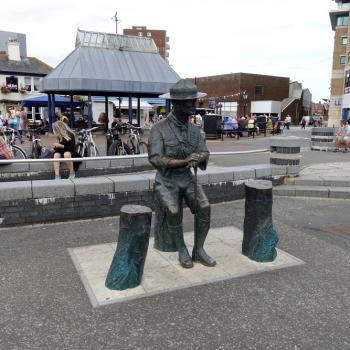