This Artist’s Drawing of the Coronavirus Is Nuts. I Have a Better Alternative. June 13, 2020 Terry Firma

This Artist’s Drawing of the Coronavirus Is Nuts. I Have a Better Alternative.

Muhammadiyah is an Islamic organization in Indonesia that tries to nudge the nation’s Muslims into modernity and toward a less fundamental version of the faith. It has been praised for being “crucial to stemming the tide of religious extremism” in the country. Its leaders take an ecumenical approach to other religions, and often stress how people of all faiths can make a difference when they work together. Two thumbs up from me, of course — except when those same leaders start writing proverbial checks they can’t cash.

Consider this assertion by Muhammadiyah’s secretary general Abdul Mu’ti in the Jakarta Post:

It is clear how religious communities share a preventive contribution through religious public education. Compared to other public venues, places of worship are less likely to become epicenters of the virus’ spread.

[R]eligious communities do not simply contribute to the battle against COVID-19 through prayers and fatwas but more importantly, these communities serve as agents of development, social health, political stability and economic sustainability.

For real? I don’t know much about the current situation in Indonesia, but this Pollyanna view of religions absolutely doesn’t track with what I’ve observed about faith and COVID in other locales over the past three months. Mu’ti further claims, implausibly, that religions “become a uniting factor of people,” seeming to take as a rule what is surely an exception. 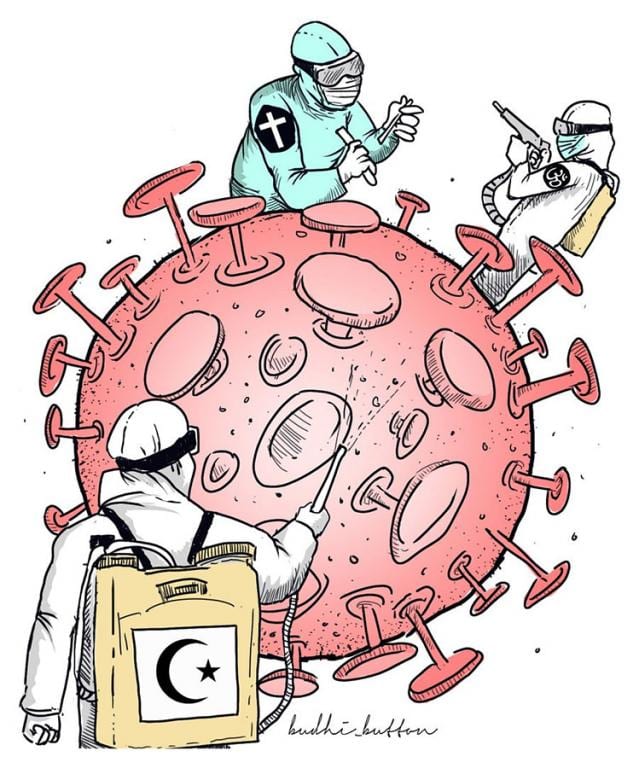 I don’t blame Hartono for this inanity; he just took his cues from Mu’ti’s text. But to pretend that different religions are in some meaningful way collaborating in the fight against the virus — with science, no less, and with serious protective clothing — is to kick reality in the face.

What we’ve predominantly seen from the faithful is an anti-science cocktail of denial, bluster, obduracy, the inability to follow directions, and the mistaken belief that God will help His followers.

The most charitable interpretation of the drawing is that maybe it’s aspirational — something to strive toward.

For a more realistic illustration of faith and COVID, I’d suggest this one (if you know who made it, let me know in the comments so I can give credit): 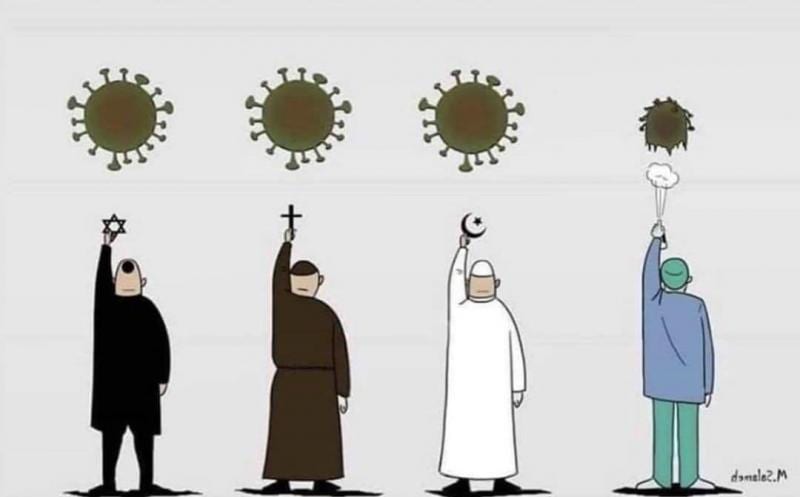 (top image © by Budhi Hartono and / or the Jakarta Post, reproduced here under the Fair Use provision of the U.S. Copyright Act of 1976.) 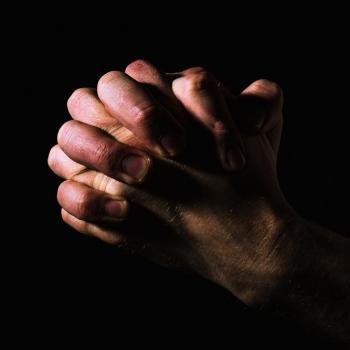 June 13, 2020
An Indian Godman Tried To Kiss the Virus Away. He Just Died of It.
Next Post 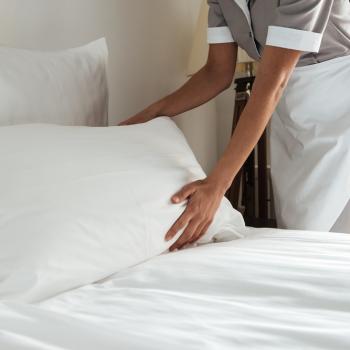