Peroutka is a Christianist and avid Roy Moore supporter who believes that “the promotion of evolution is an act of disloyalty to America,” and who has been linked to the white-supremacist League of the South.

Peroutka’s rant, amplified by Cox, takes aim at Governor Larry Hogan, one of the few nationally known GOP politicians who is generally liked by friend and foe for his level-headed, no-spin approach (the other day, CNN said that seeing Hogan and his crew in action is “see[ing] a master class in crisis communications”). Peroutka, of course, talks about Hogan as his mortal enemy — without nuance or restraint. 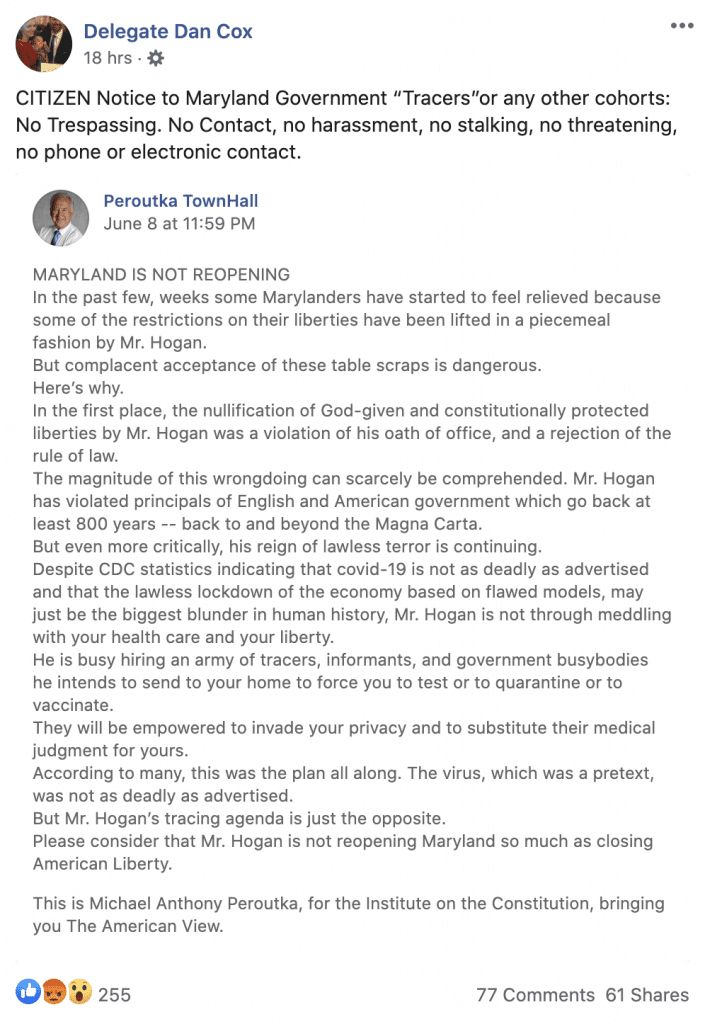 Mr. Hogan has violated principals [sic] of English and American government which go back at least 800 years — back to and beyond the Magna Carta. But even more critically, his reign of lawless terror is continuing. Despite CDC statistics indicating that covid-19 is not as deadly as advertised and that the lawless lockdown of the economy based on flawed models, may just be the biggest blunder in human history, Mr. Hogan is not through meddling with your health care and your liberty.

What’s Hogan up to then?

He is busy hiring an army of tracers, informants, and government busybodies he intends to send to your home to force you to test or to quarantine or to vaccinate. They will be empowered to invade your privacy and to substitute their medical judgment for yours. According to many, this was the plan all along.

“According to many.” Sure.

Peroutka doesn’t say what the evil plan is exactly. What do these government “informants” and “busybodies” intend to do? We never learn, but his followers just know that it’s gotta be something nefarious that red-blooded patriots must oppose.

In reality, this is what Team Hogan has worked hard to put together:

At the start of the crisis, the state had a total of 250 case investigators working at local health departments. On April 22, Governor Hogan announced a contract with the National Opinion Research Center (NORC), the nation’s oldest and largest university-based research firm, to hire and train additional case investigators. Maryland is on track to have more than 1,400 case investigators statewide.

Local health officials, with support from the state, will have the capacity to track 1,000 cases and 10,000 contacts on a daily basis. After an individual tests positive, case investigators will then reach out to those individuals by phone within 24 hours to begin a trace investigation. Based on information collected about the COVID-19 positive individual’s symptoms and contact history, case investigators will call other people with whom the individual has had contact and provide necessary guidance about monitoring symptoms and isolating at home.

That’s it. Such tracking-and-tracing brigades were one of the biggest factors in other countries bringing their corona-curve under control. South Korea, Germany, Hong Kong, and New Zealand did exactly what Peroutka and Cox, for some reason, abhor. In their view, Maryland’s tracing of infection patterns will plunge us all into a tyranny the likes of which we haven’t seen since before the Magna Carta.

Peroutka, a lawyer and former county chairman, has no formal powers today, but he has friends who do. One of them is Dan Cox. The obsequious delegate may even have Donald Trump‘s ear. He frequently takes to social media to fawn over (and to) his political man crush. “That’s my President!” he wrote excitedly after Trump had his infamous Bible photo op at the church. “Thank you Mr. President Donald J. Trump for protecting the rights of all,” Cox squeed when Trump deployed the military to Washington D.C. Every time Cox mentions POTUS, he tags him, as if wanting to impress Trump with his servility.

And now, Cox, taking a page from Peroutka’s playbook, seems to be encouraging his constituents to treat the state’s freshly-trained COVID tracers as jackbooted government thugs. 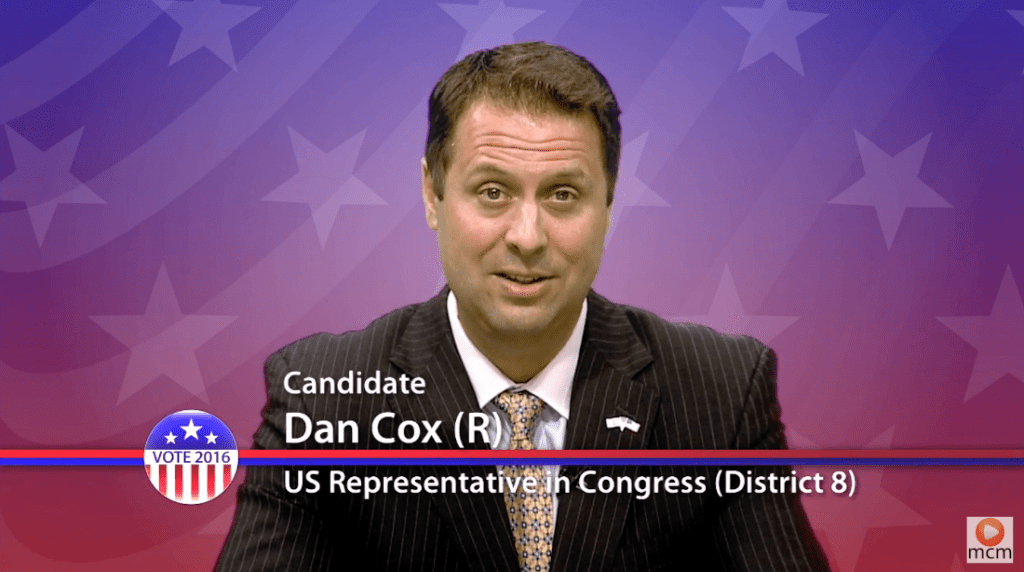 “Tracers” or any other cohorts: No Trespassing. No Contact, no harassment, no stalking, no threatening, no phone or electronic contact.

I’m almost sure that when there’s finally a vaccine, the likes of Peroutka and Cox will be advising people to reject it, because dictatorial government something something American freedumb something or other.

We saw last month that even before this bizarre scaremongering about tracer teams, half of all Americans said that they probably won’t get the potentially life-saving injection.

Rarely has a people needed a cure or a vaccine so much, and deserved it less.

(Bottom screenshot via YouTube. Thanks to Walter for the link)