As they stand, if a woman wants an abortion, the state would require her to wait 72 hours before obtaining one, hand her a booklet designed to change her mind by saying life begins at conception, require her to be given the option of looking at an ultrasound which is supposed to guilt-trip her out of having the abortion, and make her sign a document saying she was given the book and ultrasound opportunity. Basically, they’re all right-wing hurdles in the way of her medical decisions. Even if she goes ahead with the procedure, the items are all designed to make her feel really bad about her decision.

But yesterday, the U.S. Court of Appeals for the Eighth Circuit tossed out that challenge, adding to an ever-growing pile of judges who have ruled against the Satanists in this matter.

Some background: The Satanic Temple said that Missouri’s laws violated their plaintiff’s beliefs which declare that “one’s body is inviolable, subject to one’s own will alone.”

Last year, the Satanists tried again with an anonymous plaintiff, “Judy Doe,” which the Satanists used so that the courts couldn’t dismiss the problem on a technicality. That lawsuit specifically claimed the state was violating Judy Doe’s First Amendment right to “exercise [her] Freedom to Believe Abortion is Not Immoral and act upon their belief without interference or influence by the State of Missouri.” They also said it was a free exercise violation because the state was “forcing Plaintiff to act and forgo acting in a manner that violates her belief in The Satanic Tenets as a condition for getting an abortion in Missouri.”

It’s short. Just eight pages. But ultimately, the judges unanimously agreed that the law wasn’t “anything other than ‘neutral’ and ‘generally applicable.'” Even if the booklet adheres to the Catholic belief that life begins at conception, the judges said that wasn’t an endorsement of religion.

Doe’s lawyer wasn’t surprised by the ruling but has two weeks to consider appealing to the full Eighth Circuit bench… which, given its almost-entirely-appointed-by-Republicans makeup, isn’t going to reverse the ruling.

None of this is to say Missouri’s law is sensible, necessary, or religiously neutral. It’s basically conservative Christian dogma pushed upon all women. But this particular lawsuit, brought about by this particular plaintiff, wasn’t a successful way to challenge it. The pro-choice side will need a different tactic — or better politicians — to change the law.

The Satanic Temple’s Lucien Greaves expressed his own frustrations in an email to me last night, saying that the “Satanist” label may have been the dealbreaker for these judges.

… We can’t for a moment believe that our case would be so thoughtlessly dismissed, the arguments we presented so willfully evaded by the reviewing judges, if we were a Christian organization.

If there were a process whereby religious claims were sufficiently anonymized — the judges blinded to the religious identity of the plaintiff and only apprised of the pertinent legal arguments presented — there is no doubt that our situation would be entirely different today.

Of course, we will appeal. We will fight for our equality with every appeal available to us, even as the hypocrisy of the courts is made increasingly, and flagrantly, more plain. 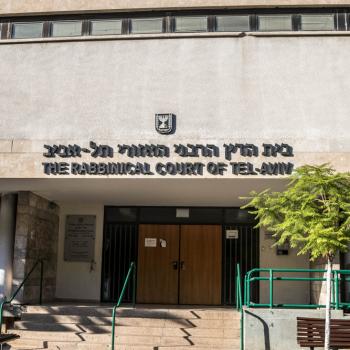 June 10, 2020 Southern Baptist Head Admits "Black Lives Matter"... But What Will He Do Now?
Browse Our Archives
What Are Your Thoughts?leave a comment