Watch All the Chaos Trump Caused So He Could Have His Pathetic Bible Photo Op June 9, 2020 Hemant Mehta

Earlier this month, Donald Trump posed for a photo op outside a church, holding up a random Bible as if that were some kind of meaningful gesture. He was universally panned for it.

Well. Almost. Trump’s evangelical supporters loved it, of course. Rev. Samuel Rodriguez praised Trump for holding the Bible “like a boss.” Rev. Johnnie Moore said he would “never forget” it. Franklin Graham said he was “encouraged!” by it.

Part of why that photo op was so awful wasn’t just the cheap way Trump used religion. It was how the administration used tear gas against protesters in order to clear the space so Trump could walk over to the church. They later denied doing that.

Reporters at the Washington Post have now recreated the minutes leading up to the Bible picture, using police scanners, videos, and more. You have to watch this. Watch how much chaos Trump caused — how much injury his administration inflicted upon innocent people — all for a photo designed to appeal to the most despicable Christians in America.

At about 6:30 p.m., just north of the White House, federal police in riot gear fired gas canisters and used grenades containing rubber pellets to scatter largely peaceful demonstrators. Their actions cleared the way for the president, surrounded by the nation’s top law enforcement and military leaders, to walk to the historic St. John’s Church for a three-minute photo op.

As the video notes, five civilians were injured. Dozens were arrested. Hundreds, if not thousands, were surely traumatized by what they experienced. All so Trump could hold up a Bible he’s never read in front of a church he doesn’t attend.

June 9, 2020
TN Bill Will Let Kids Skip an Hour of School Each Day to Go to Church
Next Post 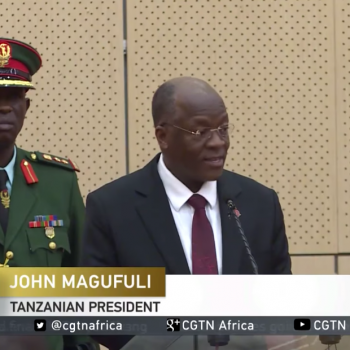 June 9, 2020 It's a Miracle! Tanzanians Prayed the Coronavirus Away, Their President Says.
Browse Our Archives
What Are Your Thoughts?leave a comment