If the Religious Must Abide By COVID-19 Rules, What About Protesters? June 5, 2020 Terry Firma

If the Religious Must Abide By COVID-19 Rules, What About Protesters?

Rightly or wrongly, I’ve gotten the impression that with the nationwide protests that erupted after the death of George Floyd, many of the same people who were adamant about social distancing just two weeks ago are no longer so concerned. If we were asking religious believers to stay home for the greater good, should we request the same of protesters?

New York City Mayor Bill de Blasio was asked that question by a reporter for an ultra-Orthodox Jewish publication, Hamodia, the other day, and rejected the equivalence. 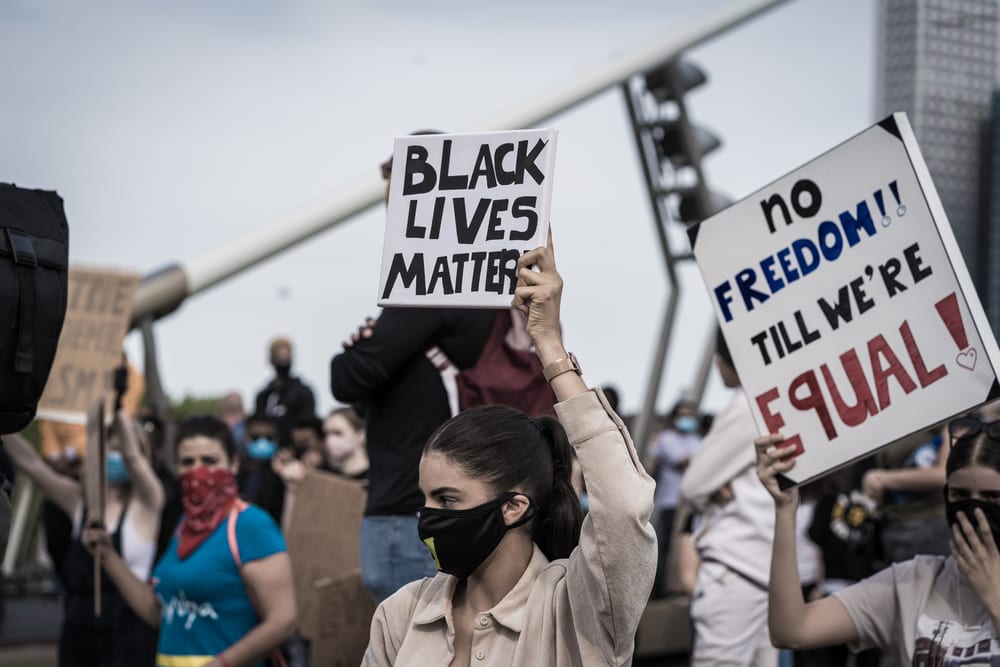 “When you see … an entire nation simultaneously grappling with an extraordinary crisis seated in 400 years of American racism, I’m sorry, that is not the same question as the understandably aggrieved store owner or the devout religious person who wants to go back to services. This is a powerful, painful historical moment.”

De Blasio came under fire five weeks ago when critics said he was too harsh on religious people who flouted the city’s COVID rules, especially Jews. He probably didn’t improve his popularity among those detractors when he referred to the John Lennon song Imagine at a press conference on Wednesday. The Catholic News Agency was of course quick to drily note that

The song imagines a more perfect world in which there is “no heaven” and “no religion.” De Blasio said the song asks essential questions “about a world where people get along differently.”

[E]ven as the NYPD stood by as huge crowds marched against racism, the police were rousting Orthodox families out of Brooklyn parks and breaking up religious study sessions that were not in compliance with social-distancing regulations.

[B]ecause he approved of the motives of some protesters and of the content of their protest, their demonstrations are uniquely privileged in a way that those seeking to exercise their right to religious liberty were not. …

The brutal killing of George Floyd rightly outraged most Americans. But lost amid the debate is the question of whether selective enforcement of the law has fundamentally undermined religious liberty. … If some citizens can break pandemic rules with impunity because they are protesting racism, while others can have their right to worship or to go to work taken away by the government because of fears about the spread of disease, that is more than merely a legal conundrum or hypocrisy. It is a sign that big-government liberals view respect for basic constitutional freedoms as dependent on whether they approve of the intent of those seeking to exercise their rights. …

If coronavirus restrictions don’t apply to the right of one group to assemble — peacefully or not — how can they legally, logically, or morally be imposed on others who want to exercise the same right?

My guess is that even if de Blasio wanted to enforce the city’s COVID rules during the demonstrations and the social unrest, he can’t — not without stoking further protests precisely by cracking down on them. So he has to put a happy face on this lack of ability to truly control things, by making it seem like City Hall and the NYPD are deliberately making a distinction between churchgoers and demonstrators. He may very well be quietly worried about the coronavirus spreading among protesters — even though most wear masks, and many do make an effort to keep a six-foot distance to others.

One important difference between demonstrators and congregants is that the latter would see little functional difference between meatspace get-togethers and virtual ones. By contrast, you can’t have meaningful protests by sitting at home, with everyone interacting via screens.

A second factor is that the protests take place outside, where the risk of infection is much smaller than in the enclosed space of a church, mosque, or synagogue.

When corona-restrictions in New York City will be loosened or dropped is subject to a four-phase plan that has no hard dates, because it uses certain benchmarks (such as enough available hospital beds) before each next phase can begin. Fully reopening houses of worship won’t happen until phase four, a fact that further ruffles believers’ feathers.

June 5, 2020 Rick Wiles: Liberal Activists Should Be Taken to Guantanamo and "Waterboarded"
Browse Our Archives
What Are Your Thoughts?leave a comment