Donald Trump‘s Electoral College victory in 2016 came from narrow wins in a handful of states — and no doubt that’s due to the fact that roughly 81% of white evangelical voters supported him.

Given that current polling shows him losing to Joe Biden — but it’s early and no one should rest easy — he can’t really afford to lose his most devoted base. And yet even some of those evangelicals are starting to slip away from him.

Apparently, staging a hasty photo op outside a church he doesn’t attend, holding up a Bible that isn’t his, while his administration throws tear gas at protesters he doesn’t like, doesn’t endear Trump to evangelicals like he thought it would.

… In March, nearly 80 percent of white evangelicals said they approved of the job Mr. Trump was doing, PRRI found. But by the end of May, with the country convulsed by racial discord, Mr. Trump’s favorability among white evangelicals had fallen 15 percentage points to 62 percent, according to a PRRI poll released Thursday. That is consistent with declines that other surveys have picked up recently. Among white Catholics, the same poll also found that his approval has fallen by 27 points since March.

“He had an opportunity in March when people were looking to him. And then within four weeks he squandered it,” [Robert P. Jones, chief executive of the Public Religion Research Institute,] said.

As the New York Times notes, Trump didn’t have overwhelming approval from white evangelicals before the 2016 election either — remember that was shortly after his pussy-grabbing comments came to light — but most of them eventually voted for him anyway. They basically got in line once they realized Trump would give them all the anti-abortion, anti-LGBTQ judges they wanted.

So even if Christians aren’t in love with Trump right now, they’re not about to vote for Biden. It won’t matter how many people die from coronavirus due to Trump’s incompetence, or how much Trump erodes our democracy, or how many Americans protests against Trumpism and police brutality, they’re obsessed with fetuses to the point that rational arguments will never convince them to vote for a Democrat even if Biden’s policies would lower abortion rates.

In other words, don’t count on white evangelicals to do the right thing. They almost never do. Why would they start now?

But maybe, just maybe, a small percentage of them will realize he’s sold them out and the tradeoff hasn’t been worth it. They will already be saddled with (accurate) claims of moral relativism, bigotry, and cruelty for generations to come. Their faith will be known for it’s cultlike devotion to Trump at the expense of anything Jesus ever did. They chose that route. In the process, they turned the word “Jesus” into a punchline for a generation of young Americans who will never equate Christianity with decency.

Do they want four more years to let those impressions become even stronger? Or do they dare vote for a decent person, with whom they disagree on some important issues, because it’s for the greater good?

Surely some white evangelicals and Catholics know better… or at least they’ve figured that out after four years of utter Republican chaos. That’s all it would take to pull the nation out of this nightmare.

June 4, 2020
Christian “Prophet”: A Demon Told Me George Soros Is Behind the Virus and Riots
Next Post 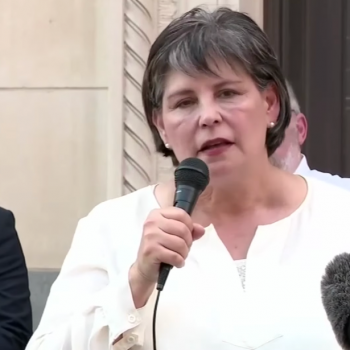