Texas Lt. Gov. Dan Patrick once blamed a school shooting on the fact that “we won’t let our kids even pray in our schools.” Even though kids can pray in schools. (He’s not a smart man. Don’t let the glasses fool you.)

And years ago, after the Pulse nightclub massacre, he tweeted a Bible verse about how “God cannot be mocked” and that “A man reaps what he sows.” (He deleted that tweet and said the timing was merely a coincidence.)

So, naturally, he was bound to say something equally idiotic about the recent protests against police brutality. And last night on FOX News, the Republican didn’t let us down.

Lt. Gov. Patrick: We have racism in this country but it’s really an issue of love. It’s loving god. We need a culture change to address this racism.. for billions of us on the planet we believe you can’t do that unless you accept Jesus Christ or unless you accept god pic.twitter.com/VkS2T5IPTq

It’s terrible, Shannon, and I think there are a lot of people speaking up now that are creating real distractions and undermining what we’re all trying to do in this country. And Shannon, for me, as I look at this and it breaks my heart, what I’m saying from the original crime that was committed by the police officer on George Floyd to what’s happening in our streets, that we have racism in this country, Shannon. But it’s really an issue of love.

It’s loving God… You cannot love your fellow man if you don’t love God, and we have a country where we’ve been working really hard, particularly on the left, to kick God out. We need a culture change to address this racism. You cannot change the culture of a country until you change the character of mankind. And you can’t change that unless you change a heart. And for millions of us on the planet, we believe you can’t do that unless you accept Jesus Christ or unless you accept God. And God has been left out of this equation through all of this.

And we need tremendous healing. We cannot heal through commissions and blue ribbon panels and and more laws. We can only heal ourselves if we really reach out and love one another. So when I see things like what General Mattis said. It’s just another distraction along the way of a country that is broken.

Saying that God would resolve the underlying racism of this country makes as much sense as suggesting we fix the problem with a bottle of Pepsi. Plenty of protesters are religious, including many pastors. We know a lot of those cops are Christians. George Floyd was part of a Christian ministry.

Guess what? It didn’t help. Neither did Donald Trump‘s multiple pointless photo ops in front of religious sites.

You don’t need God to love other people. If anything, the history of conservative Christianity in this country is one that actively promoted segregation until it became too toxic. Even today, white Christians struggle to understand discrimination.

To blame the anger that people of color are feeling right now on a lack of forced Christianity in public schools isn’t just a direct violation of the Constitution he pretends to care so much about, it completely ignores the very real concerns people are marching in the streets to make clear.

Dan Patrick doesn’t give a damn about those concerns because he foolishly thinks Jesus is necessary and sufficient to cure everything. Inequality. Racism. A pandemic. No amount of evidence to the contrary will ever make him think otherwise. His job depends upon his ignorance.

(Thanks to @sdterp for the link)

June 3, 2020
Please Support the Work I Do Through This Site
Next Post 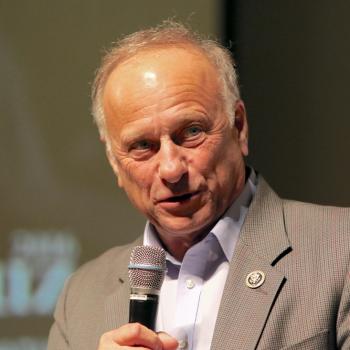