A Different Take on the Teen Freshman Who Was Ejected Over a Racist Online Rant June 4, 2020 Terry Firma

The writers on this blog tend to be in broad agreement on the topics we cover, but we don’t always see eye to eye. Yesterday, a post of Hemant‘s gave me pause.

It concerned a girl of about 18 (I’ll call her TG, for Teen Girl) whose scholarship and college admission were rescinded by Arizona Christian University over a disturbing little rant she’d published on social media. TG wrote, in a shitpost about the George Floyd police killing:

Honestly everyone needs to just stfu about this guy who died. Follow the damn law and there wouldn’t be issues. If you don’t agree with me I don’t give a fuck bc whatever you say won’t change my mind. He’s wasn’t innocent he was doing something ILLEGAL. My favorite cop will always be Brandenburg end of story. Also trump 2020. Might as well piss everyone off. 🙂

What she wrote is, unfortunately, standard conservative rhetoric, at least among a large subset of that group. That doesn’t make it better, of course. I’ll state upfront that I’ve agitated against police brutality and pushed for justice-system reform for decades. I dislike everything about TG’s statement.

I’ll also say this though: her racism is implied, not overt. That’s still a problem, but let’s not pretend that offensiveness doesn’t occur along a sliding scale. TG, who is (proverbially) barely out of braces, wrote a crude, callous post; she’s not David Duke. Most likely, she’s been influenced by mom or dad or other relatives, or by a boyfriend, or by FOX News — or all of the above. Like most adolescents, she’s probably sponged up the stuff around her, mental toxins included. That makes her under-educated, but not incorrigibly so. I wouldn’t want to write off anyone so young. Not of any race or creed; not for any reason.

TG is a teenager. Teenagers  — I have two myself — pull stupid stuff. That’s pretty much their job. Psychologists and neuroscientists largely agree that prior to age 25, your judgment can be clouded not simply by a lack of experience, but by the brain’s incomplete cognitive growth. Adults think with their prefrontal cortex, where long-term consequences are weighed. By contrast, teens depend on their amygdala for decision-making, which means they’re being pushed around a lot by their emotions. (Hence the age-old question from parents,”What the hell were you thinking?” Teens often can’t explain; they were too busy feeling to do much thinking.)

There are possibly readers who are already chomping at the bit to head to the comments section, where they’ll accuse me of making excuses for TG. I’m really not. I’m trying to do two other things: point out a few mitigating factors, and urge a little kindness.

You may not think that TG deserves kindness in the abstract. She’s just a set of initials to us right now; a culture-war emblem for a news cycle or two; an easy target for our justifiable pissed-off-ness (I’m trying to avoid the word hatred). But if she were your daughter, your sibling, your niece, your neighbor, could you honestly say you’d feel nothing but indignance and condemnation? Or would there be room for concern, for caring, for the desire to help her see things a little clearer?

When did we give up on second chances? On education?

There’s so much TG can learn. Will learn. And she’ll learn good things if good people teach her. Who do you want those people to be? Professors at a school where diversity is embraced, inquiry is free, and shibboleths of the right and the left can be critically examined? (From the school’s statement, I’ll assume that that’s the kind of institution ACU is, or aspires to be.) Or shall we give TG up to Liberty U?

Any private U.S. university has every right to do what ACU did. It’s just that when you preemptively kick out students like TG, you miss the chance to introduce them to realities outside their cocoon. If I taught at that school (perish the thought, but stick with me here), I’d love to have TG in my class just to funnel some unvarnished U.S. history into that arid mind. We might find ways to discuss privilege and poverty; overt and latent racism; the sociology of crime; the drug war and the prison-industrial complex; the rise of the warrior cop. In the right hands, she could and would get smarter. Better.

I asked my friend David, a “None” with Buddhist leanings, what he thought of the TG flap. He made a couple of excellent points.

Maybe she was just trying to be provocative, I don’t know. I’m not gonna lie: as a 59-year-old Black man living in America, I’m way tired of reading this kind of racist stupidity. I’m tired of trying to figure out justifications for stuff like this.

The school claims to be Christian. Maybe they really are, but I’m not putting any money on them. I’m betting that they wanted to get out in front of this before it hit the mainstream.

Unfortunately, now she will be able to claim [free-speech] victim status, and she may use this as an excuse to justify committing more heinous acts, if she actually believes what she wrote. Or she may get recruited by some hate group.

I thought something related when I read Hemant’s post. Hate groups aside: If anti-racist schools don’t want TG, they’re letting her slip back into her bigoted, entitled-white-princess bubble.

Where’s the sense in that?

P.S.: There may also be a double standard here, and those always annoy me. I mean this: Some students flirt with Communism, the ideology that has brought death to tens of millions, and whose methods have typically involved savage oppression. I don’t believe there are many admissions officers at liberal arts schools who’d bat an eyelash over such far-left sympathies. They might even take a shine to the socially-conscious applicant in the Che Guevara T-shirt.

P.P.S.: Neither Hemant nor I have been able to figure out what TG meant by “My favorite cop will always be Brandenburg.” Is it a reference to this racist incident? Is it somehow meant to invoke Berlin’s Brandenburg Gate, at one point a symbol for the Nazi Party? Is it an allusion to the 1960s KKK leader Clarence Brandenburg, whose case, Brandenburg v. Ohio, resulted in a landmark Supreme Court decision? I don’t think that monster was a cop though. So: not a clue. Anyone? 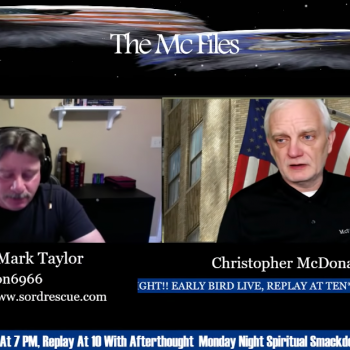 June 4, 2020 Southern Baptist Churches Just Saw the Biggest Drop in Membership in 100 Years
Browse Our Archives
What Are Your Thoughts?leave a comment