Retired Preacher Drags Wooden Cross (With a Little Wheel) All Across America May 29, 2020 Terry Firma

Steve Epp is lucky that Jesus wasn’t sentenced to die by electrocution; in that case, he’d have to drag an electric chair all over the country.

As it is, Epp, a retired preacher of 72, has taken up the cross, and he’s almost halfway through his self-imposed project; once he finishes traversing Nebraska, there are 25 states left for him (and the cross) to visit. 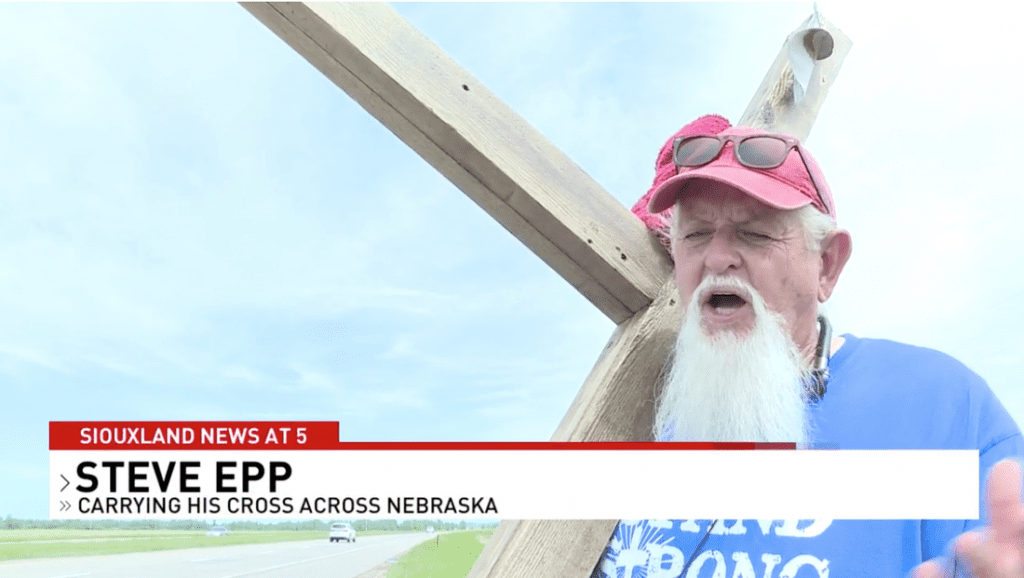 Steve Epp, a native of Tulsa, Oklahoma, began his journey carrying a cross through Nebraska Wednesday, May 27th. “This is ludicrous. It really is. It’s barbaric,” Steve admits.

Most people don’t do things that are ludicrous and barbaric, but Epp is on a mission from God.

He began this journey seven years ago, when he heard God tell him that He had big plans for Steve in these later years. “God spoke to me, He said ‘take up your cross.’ I said, ‘Lord, that’s in the Gospels, I know that.’ He said, ‘I want you to build a cross.’ I thought it was crazy,” said Steve. “And the very first day after we built the cross my house sold, we got in our jeep and started traveling across the country.”

The cross is about eight feet tall, but Epp has mounted a small wheel to the bottom to make it easier to drag. It’s an innovation Christ himself might have appreciated receiving as a 33rd-birthday present.

The preacher walk-drags a distance of 10 miles each day, after which his wife, Saundra, picks him up in their RV.

“God’s been good to me out here,” says Steve. “I believe He’s blessed me in my age, because He knows what I’m doing is for Him, it’s not for my show.”

To his credit, Epp doesn’t solicit money from anyone.

He seems like a nice enough guy. There’s always the notion that he could be doing something more obviously useful (help out at local Emmaus centers, or teach ESL to immigrants, or volunteer at halfway houses, what have you), but that should be left up to each individual. A lot of retirees probably sit around watching TV or playing Sudoku, and while I don’t have a problem with that either, I’d be more attracted to Epp’s lifestyle. As long as he poses no dangerous distraction to drivers, and he’s not aggressive in his preaching and proselytizing, I’m glad he has a hobby, and I hope he enjoys it for a long time. 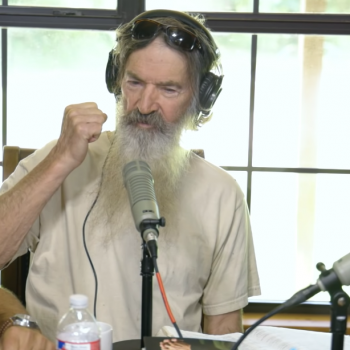 May 29, 2020
Duck Dynasty’s Phil Robertson Had a Secret Daughter from an Affair in the 1970s
Next Post 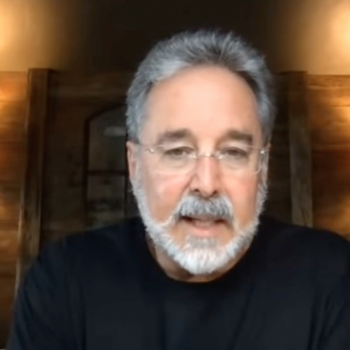 May 29, 2020 Pastor: Satan Wants Joe Biden to Win in Order to Carry Out "Another Holocaust"
Browse Our Archives
What Are Your Thoughts?leave a comment