Duck Dynasty’s Phil Robertson Had a Secret Daughter from an Affair in the 1970s May 29, 2020 Hemant Mehta

Celebrity news can be invasive and dull, but when your celebrity hinges on your outspoken Christianity, and a scandal involves a violation of those morals, it feels like fair game.

For years now, Duck Dynasty patriarch Phil Robertson has been espousing conservative Christianity, saying universal health care was unnecessary because God makes us “immortal,” suggesting that all Democrats hate Jesus, and fantasizing about the rape and murder of atheists.

Yesterday, during a podcast hosted by his sons, Al Robertson explained that he had recently received a letter from a woman, Phyliss, who claimed to be Phil’s long-lost daughter. She was the result of an affair. The boys couldn’t believe it, in part because of her age:

Al said he initially “dismissed” the letter because Phyliss was born after Phil, now 74, had become a Christian.

After speaking with Phyliss, they confronted their parents about it. A DNA test later confirmed that Phil was the father.

If you listen to the episode, though, they rationalize this — and I’m not making this up — by saying Phil had sex nine months earlier when he wasn’t a Christian. Therefore, no hypocrisy. (I guess not raising your illegitimate daughter is cool if you’re born again.)

I’m tempted to call out his hypocrisy, but considering how most white evangelicals have ignored the cruelty and bigotry of the Trump administration, is this even considered a scandal anymore? Robertson was always a Christian bigot. A guy who got suspended from his own show because he equated homosexuality with bestiality. Now he’s a Christian bigot and new dad to a 45-year-old daughter.

It’s not a “pretty cool explanation of redemption, reconciliation, love,” as Robertson said on the show. It’s a reminder that the Christians who project holier-than-thou attitudes always seem to be hiding secrets of their own. 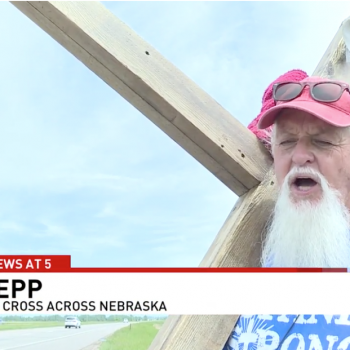